Today marks the 50th anniversary of Doraemon, one of Japan’s most beloved children’s series. From manga to TV anime to its yearly films, it’s enchanted generations of readers and viewers. It’s had the sort of impact shows like Sesame Street have had in the West, becoming an integral part of childhoods. Well-known actors who cameo in the films are often huge Doraemon fans themselves, and consider the roles the achievement of a lifelong dream.

For those who haven’t encountered the show, here’s a quick breakdown. Nobita is an average ten-year-old schoolkid who loves reading manga and hates doing homework and chores. He has friends and rivals, including his crush Shizuka, but his best friend is Doraemon: an earless robot cat from the 22nd Century (or the 21st century, in earlier versions). On days when Nobita is attempting to put off responsibilities—that is, every day—Doraemon produces a futuristic appliance from his fourth-dimensional pocket to assist in Nobita’s plans. Sometimes the device helps, but other times it teaches Nobita a lesson about friendship, hard work, or, you know, doing your homework. 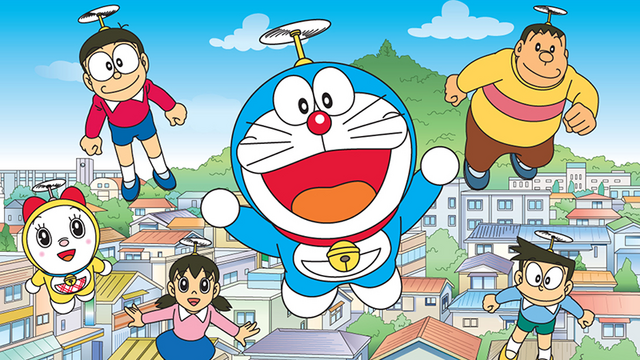 Some of these gadgets are relatively harmless and have become beloved by fans, like the iconic “take-copter” that allows the characters to fly around. Others, though, make one wonder what exactly people are getting up to in the 22nd Century. And while Doraemon may in some cases have been using these over-the-top items to teach Nobita a hard lesson, they’re still… well, over the top.

So to celebrate 50 years of friendship, magic, and adventure in Doraemon, we’re looking at some of the weirdest futuristic gadgets that maybe Nobita (or anyone, for that matter) shouldn’t have had access to. 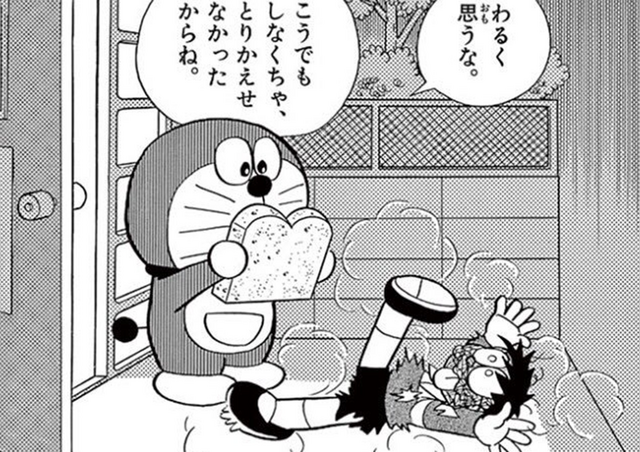 So your mom is about to cut your allowance. What do you do: get your act together, start looking for a paper route, or use a magic artifact to inflict an act of God on her? I’m not sure about you, but Nobita went for Door #3.

The Ten Commandments Tablet lets the owner write down ten rules that, if broken by anyone, will result in them being struck by lightning. Nobita’s first rule was “Thou shalt not cut Nobita’s allowance”… and when Doraemon realized he may have made a mistake, it was followed quickly by “Thou shalt not take back gadgets you lent to your friend.”

While rules can’t be erased, they can be negated by later rules—as Nobita found out when he got zapped after writing “Thou shalt not just make up whatever rules you want.” 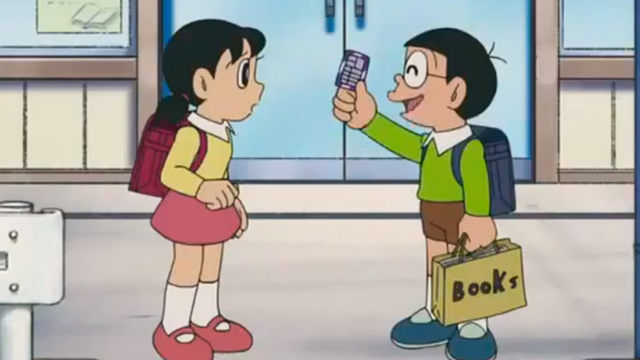 Technically this is a bit of a cheat, as Nobita received this from a monster rather than from Doraemon himself… but without Doraemon, there would have been no monster in the first place, so we’re counting it.

The Devil Card, besides sounding completely safe and not at all like something that will mess you up, drops free money whenever you shake it. There is, of course, a catch: for every 300 yen you accumulate, you will shrink by 1mm. And you won’t get any heigh you lose from the Devil Card back. Combine that with a kid who wants free money to buy manga, and before long Nobita is swimming in his own clothes.

Doraemon does get Nobita back to his normal height with the Big Light, a flashlight that does just what it says. The combo of the Devil Card and the Big Light seems like the ultimate free money hack, but Doraemon dispatches both the monster and the card. Nobita will have to singlehanded destroy the economy some other day. 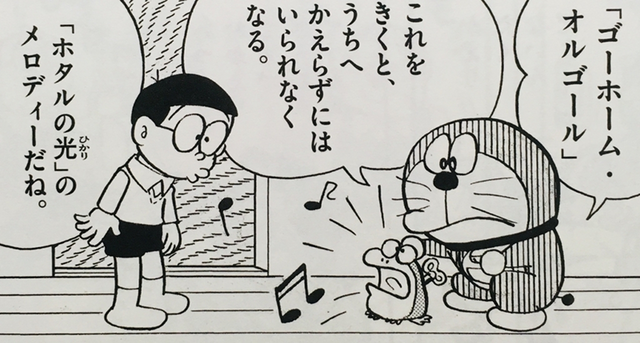 This frog-shaped music box does just what it says on the tin (“frog” and “return home,” though written differently in Japanese, are both pronounced kaeru). This little dude plays “Hotaru no Hikari,” a Japanese song set to the tune of “Auld Lang Syne” that’s often played at the end of school days, broadcast days, and business hours. Play it in front of whoever needs to get lost and they’ll just… go home.

File this one under “Kids really shouldn’t have this, but I definitely want one for next time I throw a party.” 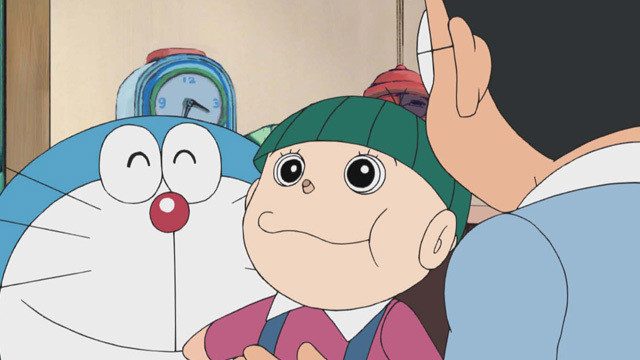 This is a doll that reads your mind and says what you’re thinking. I don’t know about you, but that’s what we in the industry call a cursed doll.

However, Doraemon and Nobita actually use Honest Taro (a.k.a. the Truth Doll) willingly and on purpose. The initial goal was to help out Nobita’s uncle, who was too shy to confess his crush to the woman he likes. Honest Taro would read Tamao’s mind and say it for him.

To be fair, the goal is eventually achieved… but not before things go spectacularly wrong in all the ways you’re assuming they would. 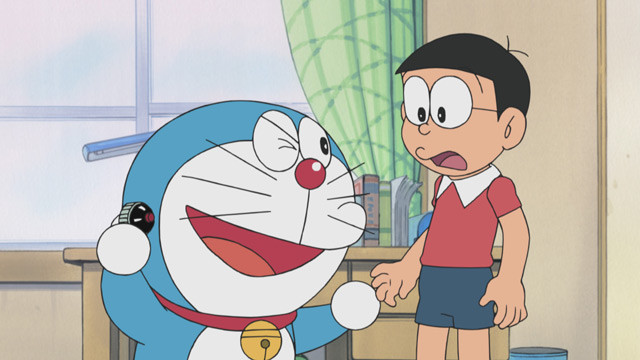 The story goes that, in the 22nd century, an evil dictator used this device to delete anyone who did not adhere to their every word. The people will disappear from existence, with only the switch’s owner and anyone who witnessed the disappearance remembering they even existed. This raises a lot of questions, the first being “What is Doraemon doing with it?” Rather than giving it to a museum or lab, he gives it to Nobita, who uses it to send anyone who teases him straight to the cornfield.

After a nightmare about everyone mocking and abandoning him, Nobita goes on to learn that a double-click will delete everyone in the world except the owner and user. Fortunately, those are two separate people in this case, meaning Doraemon is around to inform Nobita that the disappearances can be undone.

This was probably meant to be a lesson about how to cope with bullying and paranoia, and I’m guessing it worked, but that’s a big way to go about it. 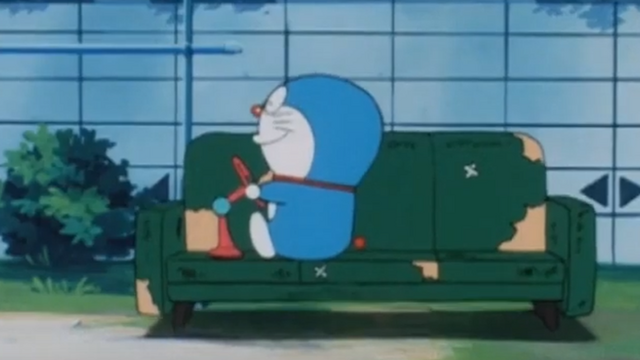 It’s a steering wheel. You stick it on anything. And now it’s a car. You can literally control anything just by sticking this steering wheel to it.

In the context of the episode it’s used to move heavy furniture around, which sounds great. But Doraemon has also given Nobita access to devices that control people and occasionally just un-exist them. Even if it’s being used responsibly now, I’m not sure how I feel knowing this is just one pocket-dive away from Nobita sticking it to his dad’s head and using him as an epic mount. 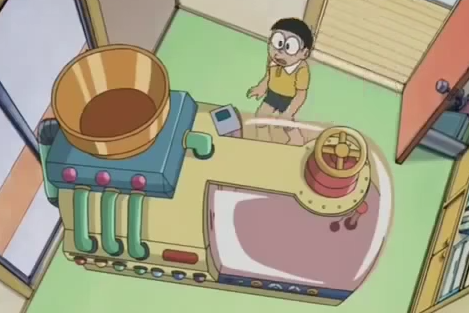 Okay, back up. Doraemon has a machine that will literally create human life. There it is, in Nobita’s room. Nobita uses it. He creates a person. The person’s name is Newton. This is a thing that actually happens.

There are two mitigating factors to this that may not even be mitigating factors. One is that this gadget is considered “forbidden.” So at least Doraemon knows he’s not supposed to be letting people use this (though it still happens). The other is that the gadget doesn’t create particularly humanoid humans. Anything that comes out of it is a mutant. Not sure if that’s worse or better.

In later seasons, the machine creates fictional characters and animals, which is maybe a little better? At any rate, we’ve probably hit the boundary for how ridiculous and disturbing Doraemon’s collection is. 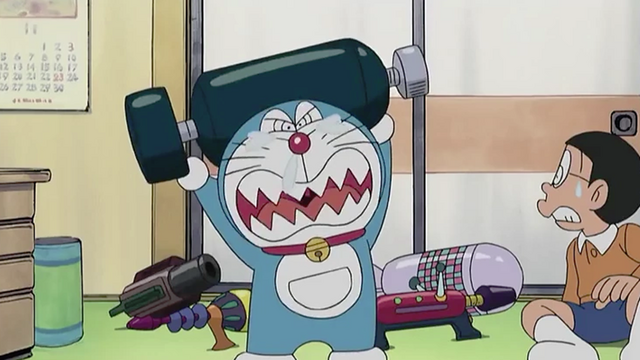 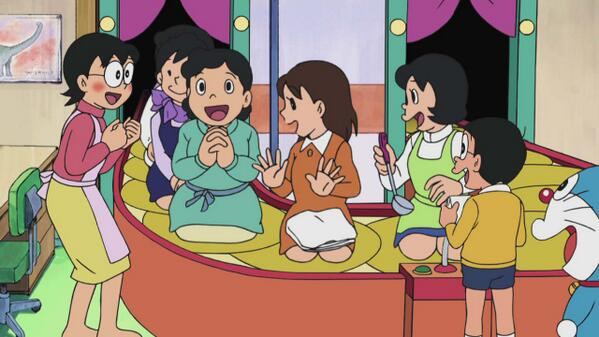 Let’s close out with something a little less terrifying: a gadget that’s still overpowered, but could be great under the right circumstances.

The “Sushi Conveyor Belt of People I Want to See” once again does exactly what it says on the tin: press the button and put in an “order,” and whoever you name will teleport onto the sushi conveyor belt. You’ll get a bit of time to hang out before they go back to where they were before you called for them.

The whole “teleporting against their will” thing is a bit worrying, obviously—but for long-distance friends, this plus a quick phone call to the teleportee to arrange a convenient time would be the answer to a lot of prayers. Overpowered? Yes. Super helpful when used responsibly? Also yes… which ranks it above human delete buttons and spooky dolls.

As strange as Doraemon can get, it’s still won over fans around the world. Its messages of hope, perseverence, friendship, and love make it a long-lasting addition to the world of anime, and one we hope continues to be loved for years to come. Just, you know, maybe keep an eye on what kind of world-ending tools you let Nobita have access to.

Do you have any Doraemon memories? Share them with us in the comments!

Kara Dennison is a writer, editor, and interviewer with bylines at VRV, We Are Cult, Fanbyte, and many more. She is also the co-founder of Altrix Books and co-creator of the OEL light novel series Owl’s Flower. Kara blogs at karadennison.com and tweets @RubyCosmos.

Google’s Nest Hub Max smart screen is bigger, better, and always watching (if you want it to) – Popular Science