Following a bit of a hiccup when it came to the previous Chrome OS 75 release, Chrome OS 76 has been pushed to the Stable Channel and is rolling out to some devices. As well as picking up features from Chrome 76, the latest release includes Android-style notification media controls, support for virtual desktops, some accessibility improvements, and GPU acceleration for some Chromebooks in Crostini/Linux containers, among a whole pile of other changes — and you’ll get to hear about most of them via the new “What’s new with your Chromebook?” release notes notification when you upgrade. 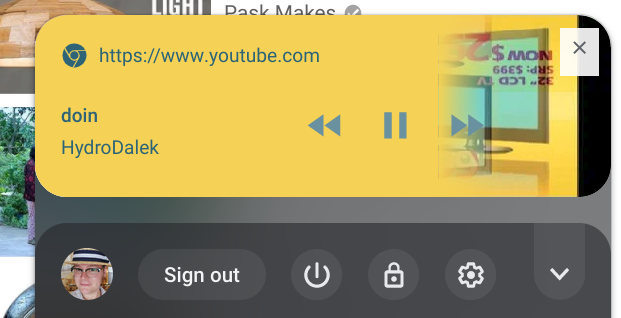 Android-style media controls via a notification in Chrome OS 76.

Google doesn’t publish the most verbose changelogs with each Chrome OS release, but the list posted for Chrome OS 76 is just below:

Chrome OS has an accessibility setting called Automatic Clicks for users with motor or dexterity challenges. With Automatic Clicks, you can hover over an item and Chrome OS clicks automatically after a certain amount of time. In addition to left click, you can now right click, double click and click and drag, making it easier to be efficient and productive on your Chromebook.

This feature can be used with the touchpad, a connected mouse or joystick, or even head tracking.

New media controls make it easier for you to pause or play sound from a tab or an app. You can open your system menu and see all of the tabs or apps on your Chromebook that are playing audio tracks and control them from one place.

If you use multiple Google accounts on your Chromebook, we’re unifying account management in one place, under Google Accounts in Settings so you can more easily login to all of your accounts and see which accounts you are using on your device and across Chrome and Play Store apps. Access and permissions you’ve granted to apps, websites, and extensions in Chrome and Google Play may now apply to all your signed-in accounts. 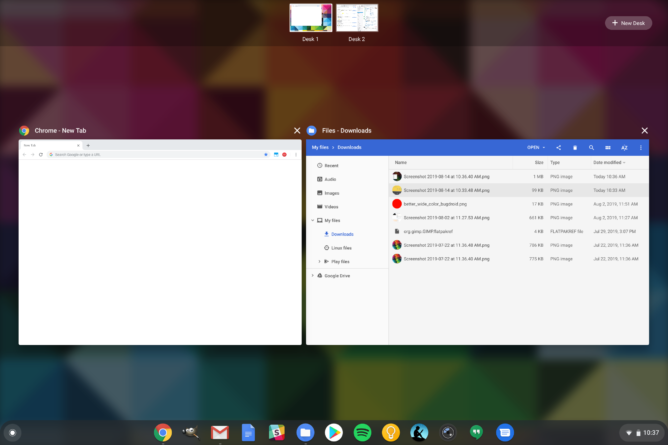 In addition to those features, I’m terribly excited to note that virtual desktops feature Google has branded “Virtual Desks” has arrived at the Stable channel as of Chrome OS 76. We’ve been playing with the feature for months (after begging Google to add it for even longer), and while it’s missing many of the bells and whistles compared to similar implementations on macOS and Windows have, you can finally manage windows across multiple workspaces, enhancing productivity in visually constrained environments like laptops.

I’m not sure if you’ll have to manually enable the feature’s testing flag (chrome://flags/#enable-virtual-desks) to see it as you had to when the feature was in Beta/Dev/Canary, but Google’s “What’s new with your Chromebook” makes it sound like it should be on by default. 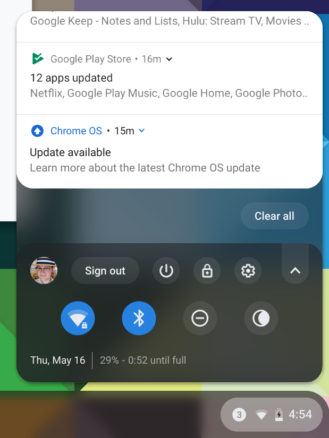 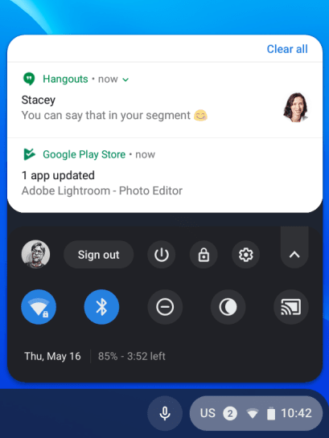 Chrome OS 76 was also meant to move the notification “clear all” button from the bottom of the list (where it was only accessible/visible after scrolling) to the top of the list where it can always be seen.

A fix for volume button orientation on Chrome OS-powered 2-in-1s was also supposed to make the cut in Chrome OS 76, but based on the most recent developer comments on the related bug, it may have been “punted” to the next release — we’ll have to see when it lands. A pile of other bugfixes is also included, though the fix for Linux containers causing a crash on sleep also seems to have been pushed to M77.

Other features spotted in Chrome OS 76 by us as well as our friends over at About Chromebooks and Chrome Unboxed include:

As of right now, the update to Chrome OS 76 is rolling out to quite a few Chromebooks/Chromeboxes according to the published release table, though the Pixelbook hasn’t snagged it just yet. While there are a few holdouts, other devices should get the update in the coming days.