Regardless of the form factor, connectivity, and any other specs, the idea behind most audio headsets is that the sound should pass by your eardrum. That makes sense — after all, that’s how we all hear. Bone conduction headphones challenge that idea. They use a magical technology to bypass your eardrums altogether.

The result is headphones that are comfortable to wear even if you dislike the feeling of lodged in-ear buds or the weight and pressure of over-ear headsets. They also keep your ears open for maximum awareness. Whether or not this is a product you need is up to you, but if you’re in the market for bone conduction headphones, AfterShokz’s new Aeropex is an excellent option thanks to its comfort, stability, and sound quality. The $160 price, however, is a little on the steep side.

Hardware, design, what’s in the box

The Aeropex follows the same form factor as AfterShokz’s previous models. It’s a thin neck band with two modules behind the ear on each side, and big loops to sit around your ears. However, instead of earbuds at the end, you get two “earpiece” elements without any openings for the sound. They house the transducers and the science behind them is easily explained: like all bone conduction headphones, they transform sound into vibrations and deliver them straight to your inner ear through your cheekbones. 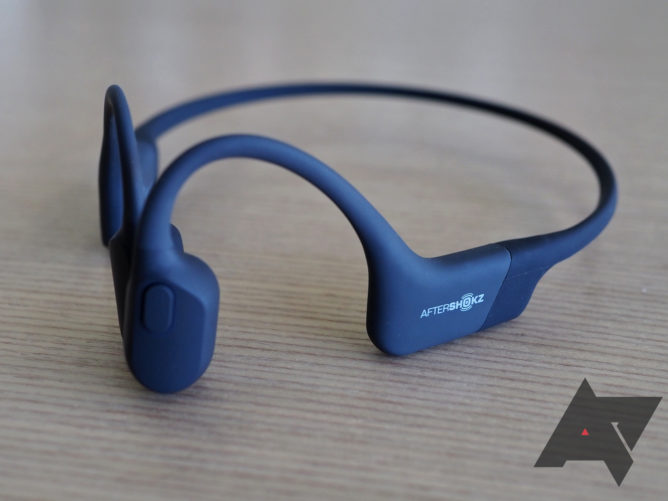 The right module behind the ear houses the magnetic charging port, a hidden LED light, and the volume rocker (which has the power button). Pressing volume up and down simultaneously for three seconds changes the equalizer, but the second profile is so hollow and low, that I tried this once and never again. The right earpiece has two holes for two microphones.

The left module behind the ear doesn’t have any controls or ports, while the left earpiece is where you’ll find the play/pause button. The latter can also answer calls, redial the last number, and bring up Assistant. There’s no app so you can’t customize controls, listening profiles, or eventually update the Aeropex’s firmware. 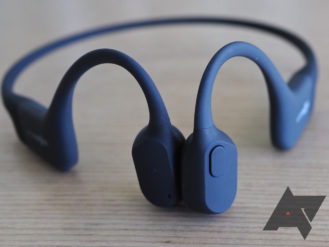 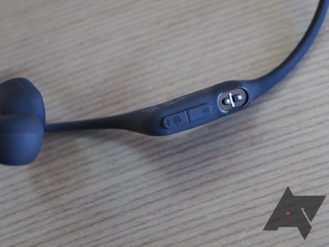 Design and build quality are near perfect. I had the AfterShokz Bluez previously, which were larger, heavier, more brute, and had a lot of shiny plastic. Compared to them, the Aeropex is smaller, lighter, and looks slick and minimalistic.

Both the neck band and ear loops are semi-flexible. I can twist them and open them, but they go back to their initial shapes immediately after I let go of them. The entirety of the headphone is covered with soft rubber, though the ear hooks and cheekbone elements are smoother than the band to the touch. That contributes to the headset’s comfort and stability.

In the box, you get a large soft rubber carry case with a magnetic flap, two USB charging cables, manuals, and a pair of soft ear plugs. While I’m not a fan of the proprietary charging method, I have to praise AfterShokz for including two cables so you can keep one at home and one at work or in your purse/backpack. You also know you have a spare in case you lose or misplace one of them. 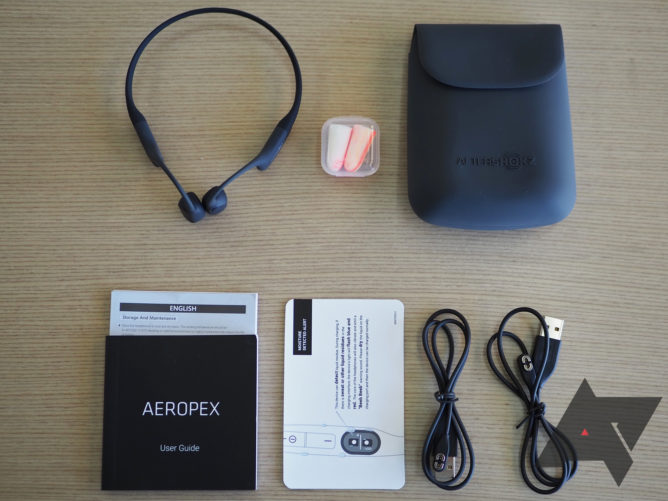 Since there was nothing going inside my ear or covering it up, and because of the Aeropex’s super light weight (0.92oz, 26g), it almost felt at times like I didn’t have anything on. The angled transducers fit perfectly over my cheekbones and there was no pressure anywhere on my ear or head while wearing them.

The rubber material kept them in place regardless of how many times I bobbed my head or if I got sweaty while exercising. The one situation I wasn’t very comfortable wearing them is laying down. Since my head is small, the neck band has a lot of wiggle room — same as what you see in my husband’s pics below. This isn’t an issue while standing, walking, running, or even sitting, but put a pillow behind my head and the band has to be angled down toward my neck, plus I have to adjust my position a few times to keep them properly placed on my cheekbones. 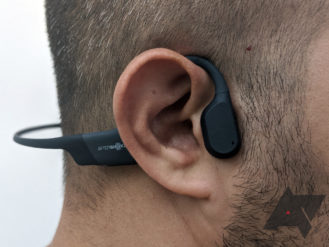 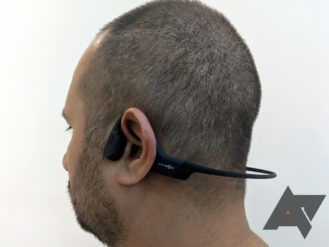 My husband playing head model to showcase the fit. My hair kept getting in the way of the pic 😉

Besides making pics with them less clear, long hair means you need a second or two more to put these on. If you’re used to the convenience of slipping true wireless earbuds in each ear, or slipping large headphones over your head, it takes a couple of times to get used to wearing these by putting them around your neck and under your hair first, then hooking each ear loop separately. It’s not a deal-breaker but a little-known side effect.

You’re making a few other sacrifices with this design too: there’s no isolation from outside noises, not passive nor active, and there’s no on-the-go charging like with true-wireless earbuds and their cases. But in return, you get a pair of headphones that keeps you in touch with the world around you.

Although I tested the Aeropex in outdoor settings, I’ll say my most frequent use case ended up being at the pharmacy. I often spend the first hour or two each day moving around between the stock room and the main pharmacy, but I also have to keep an eye out for patients and phone calls. With earbuds and monitors, regardless of the volume, I sometimes turn around and startle when I see a patient at the counter because I didn’t hear them and I had my back to the door. It also takes several seconds for me to notice the faint sound of the phone ringing. Nevermind the fact that I have to pause the audio and take the headphones off in order to answer either patient or call. 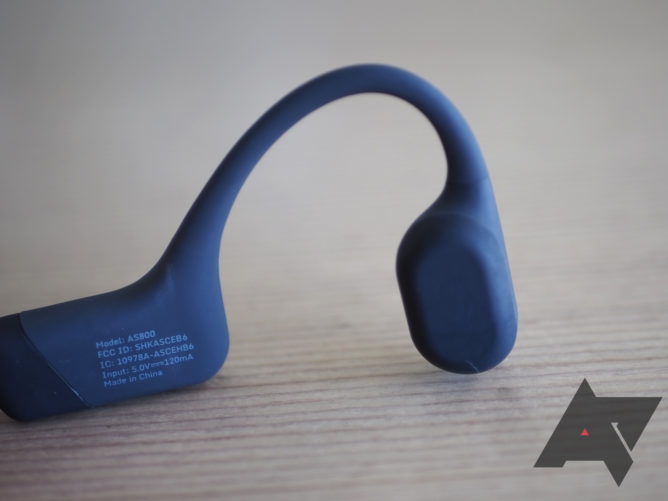 With the Aeropex, things are much smoother. At low to medium volume, I can still hear the vague sound of the glass door opening and someone walking in, and I definitely don’t miss the phone anymore. All while still enjoying my music or podcast, and not having to take the headphones off to handle any conversation then put them back on. That convenience is priceless when it helps you avoid several jarring interruptions every day.

At high volume though, prepare to miss out on a lot of conversations. You can still hear a car or truck passing by, but regular chit-chats will require you pause the audio to be able to pay proper attention. Another quirky thing that’ll surprise you at high volume are the ticklish vibrations on your cheekbones. These used to be much more noticeable with the older Bluez but they’re tamer now — barely noticeable at medium volume but can be felt at higher volumes with bass.

Sound quality is very good… considering there’s no seal and sound is passing by your cheekbones. If I press the earpiece element into my cheekbone, I get a louder and more enveloping sound, so perhaps people with a larger head would get a better experience. However, as it is, the sound is nice even if a little hollow. Mids are good, vocals in music and podcasts are clear. Highs are crisp, though I did feel they lost a bit of their definition when listening to busier arrangements. Bass is usually where other bone conduction headphones fail, either replacing it with uncomfortable vibrations or nearly muting it. That was the case with my older AfterShokz Bluez, but the Aeropex manages to actually get bass across to your inner ear. It’s not the beat-thumping bass you’ll get from regular headphones, but it has the merit of being there. Podcasts, pop, and rock fit well with the sound profile, but if hip hop and urban music are more your jam, you’re going to find the Aeropex lacking.

The biggest compliment I can give the Aeropex is to say that at times I forgot what they were and enjoyed listening. I’m not an audiophile, so sound quality will always come second to my personal appreciation of the song or podcast. Each time I stopped actively analyzing the sound, it was good enough for me to enjoy what I was listening to. And that’s all that matters in the end.

Yes. If you want bone conduction headphones, nothing comes close in the category. The Aeropex are light, well built, super comfortable to wear for long periods of time, and last on a charge (even more than the advertised eight hours). They vibrate less than similar headphones, and actually sound good enough for their form factor and use case. 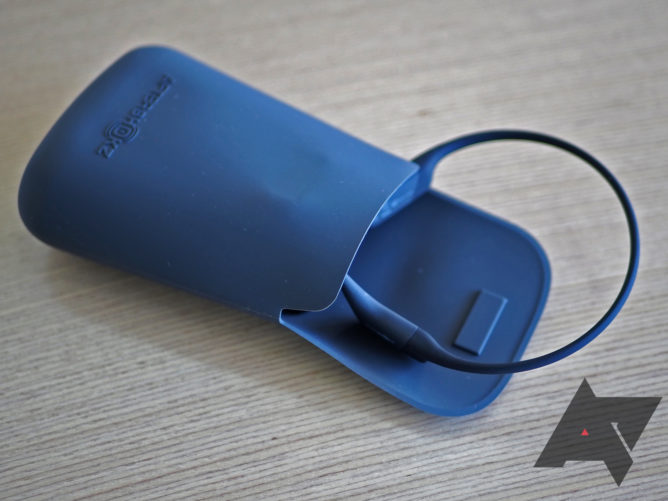 Bone conduction headphones aren’t for everyone though. If you don’t fit the usage profile, you’ll be paying a lot and making too many compromises when you could get better Bluetooth earbuds or headphones for less. But if you exercise or work outdoors and need to stay aware of your surroundings, work a job where you often alternate between music/podcasts and listening to people or sounds around you, or simply don’t like the feeling of in-ear buds or the pressure of over-ear monitors, bone conduction headphones are a nice solution and the Aeropex are worth the admission price.

Why Apple Killed The MacBook Pro