The Mi LED Wi-Fi Smart Bulb has a pear-shaped profile, but with a less curvy design and sharper lines than most commonly available LED bulbs. Unlike standard bulbs, the Xiaomi offering has a metallic base and is quite heavy. The matte finish lends a premium touch to it and helps with heat dissipation.

One important aspect that you should consider before buying the Xiaomi Mi LED Wi-Fi Smart Bulb is that instead of the B22 bayonet standard that is widely used in India, the Mi LED Wi-Fi Smart Bulb has a base with screw ridges made for E27 holders. The latter can be found on some decorative lamps and chandeliers, but most Indian homes are fitted with the B22 bulb holders.

This means that you’ll have to separately purchase an E27 to B22 socket converter for each and every Xiaomi bulb you buy. As for the E27 to B22 socket converters, these are easily available in the market for around Rs. 150 to Rs. 200, and we’d recommend that you stay away from cheaper ones made out of flimsy plastic, as they might get loose over time and cause the Mi LED Wi-Fi Smart Bulb to fall due to its weight. 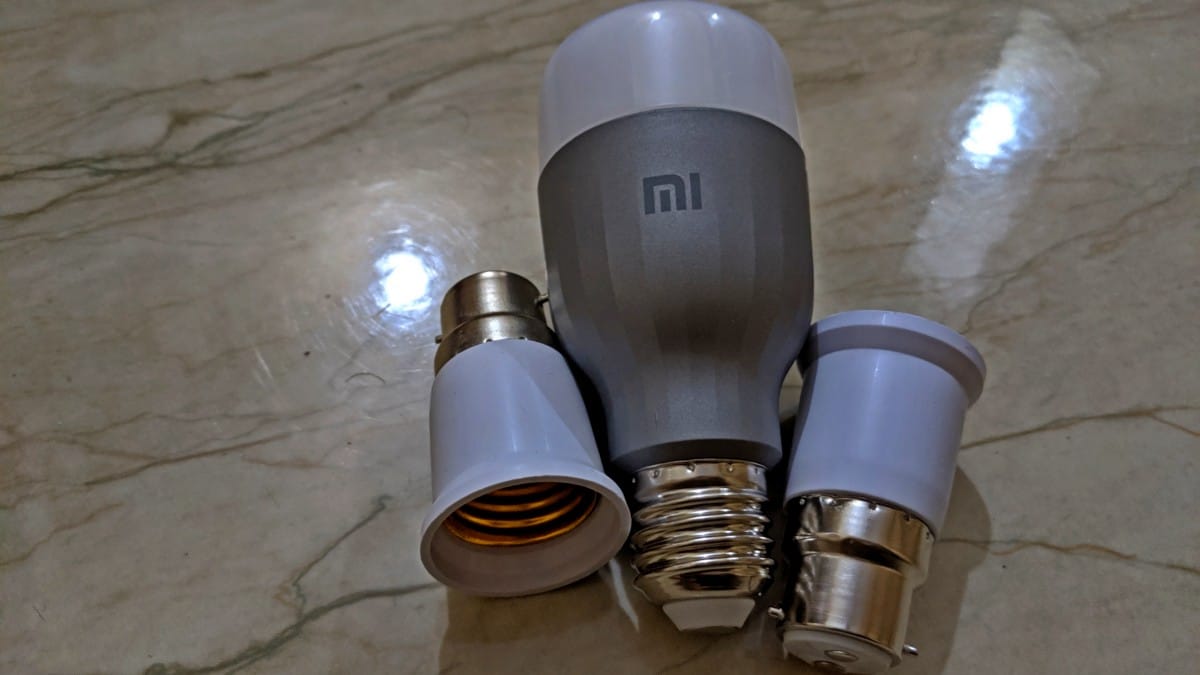 A key advantage that the Mi LED Wi-Fi Smart Bulb has over some competing smart home products is that it does not require a separate hub or a bridge to connect with, as it comes with in-built Wi-Fi. You just plug it in and you are good to go.

The Mi LED Bulb is controlled using the Mi Home app, which acts as a unified control hub for nearly all the connected smart home devices offered by Xiaomi. To start things off, fit the Mi LED Wi-Fi Smart Bulb into the socket and download the app.

Once the bulb lights up, open the Mi Home app and sign in with your Mi account. If you don’t already have one, creating it takes less than a minute. Once you have signed in with your Mi account, tap the ‘+’ button at the top of the home page and connect with the Mi LED Wi-Fi Smart Bulb. The phone will use Bluetooth to search for the Mi LED Wi-Fi Smart Bulb, and once it discovers it, the two devices will sync.

If the phone fails to discover the device, you can add it manually by resetting the Mi LED Wi-Fi Smart Bulb. To do so, switch the bulb off and then on again five times in a row with a two-second gap between each step. Once you have performed the reset step, the Mi LED Wi-Fi Smart Bulb will display a multi-coloured effect briefly and will then turn white. At this point, select the ‘Add Manually’ option in the Mi Home app and then tap on the ‘Operation Confirmed’ button on the next screen.

Once you do that, select the Mi LED bulb prompt once it appears on the screen to connect with it, and then enter the Wi-Fi router credentials to sync your phone or tablet with the bulb. After the Mi LED Smart LED bulb has been connected via the Mi Home app, you can assign it a name and define the room in which it is installed. This comes in handy if you have multiple units in your house or workspace.

The installation and setup process is quite simple and can be completed in five to ten minutes. The Mi Home app has all the features that you need to interact with the bulb, but that’s only half of the device’s intended use case scenario. The Mi Home Smart LED bulb can also be controlled via Amazon’s Alexa and Google Assistant voice assistants.

To link your bulb with an AI assistant, you’ll need to have the Google Assistant or Alexa app. Just follow the steps listed in the instruction leaflet to sync the virtual assistant of your choice with the Mi LED Wi-Fi Smart Bulb. Once that is done, you can control the device using voice commands, create routines, and do a lot more. 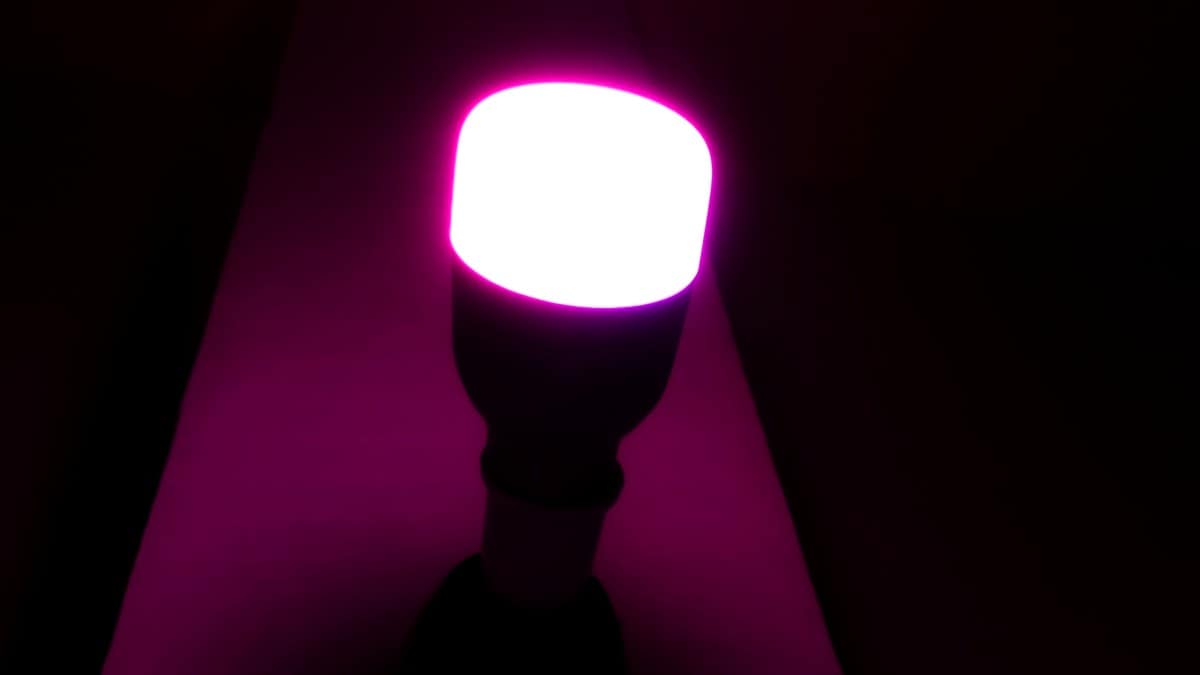 You will find five toggles on the Mi LED Wi-Fi Smart Bulb’s home page in the Mi Home app. You can turn the light on/off, adjust the colour, or enable the ‘Flow’ mode that smoothly transitions between different colours. You can also tap the heart icon at the top to save a particular hue as a favourite and assign it a name.

In the Favourites section, which can be opened by tapping the star icon at the bottom, you’ll find a list of light colours you’ve saved as favourites in the past and can also choose from some pre-installed presets. For example, the Sunrise effect turns on the light and gradually increases its brightness over the next fifteen minutes.

The Sunset effect dims the light and turns it off within ten minutes. We found these two light effect presets particularly useful. There are also some scenario-based options such as Movie, Birthday, Date Night, and Romantic Evening among others, with each one producing a distinct shade of light at different brightness levels.​ 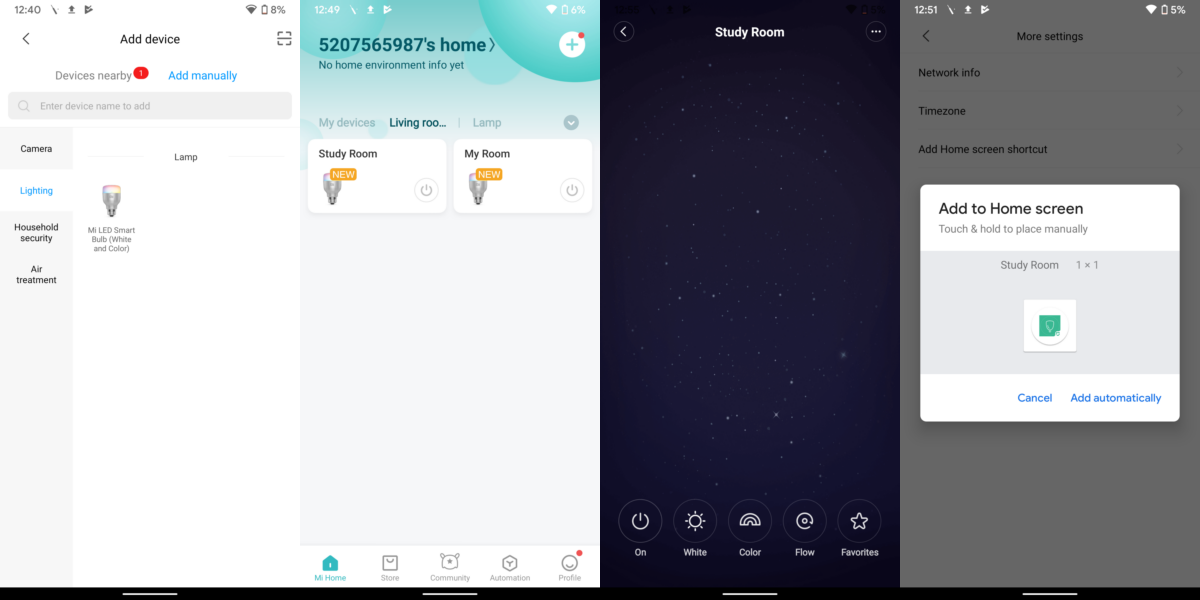 Over in the settings section, you can set schedules for turning the Mi LED Wi-Fi Smart Bulb on and off, and create if/ then routines for each bulb in your home. For example, you can set a routine to turn the bulb on/ off, set the brightness, adjust the colour, apply a present, and a lot more. You can also choose to receive a notification when a routine is executed, and delay it if the need arises.

We found the ability to remotely control the lights in our home to be quite gratifying, and the additional features were the cherry on top. Moreover, the ability to perform the aforementioned tasks using voice commands was extremely convenient.

“Hey Google, turn the light in my room to green and set the brightness to 50 percent” — how convenient is that! Unfortunately, there is no tool that could make the Mi LED Wi-Fi Smart Bulb act as a notification alert when a message arrives on the connected phone or tablet.

You can also control the Mi LED Wi-Fi Smart Bulb via Alexa, Google Assistant, or the Google Home app. In the Google Home app, you can select between 42 colours that are presented as large solid circles. We found this approach of picking the light colour more convenient, compared to the colour slider in the Mi Home app. Of course, you always have the option of simply summoning the Google Assistant and ask it to do your bidding,

In the Alexa app, you can choose between five shades of white and a host of other colours. Just like the Mi Home app, you can create routines in the Alexa app as well. Moreover, you can adjust brightness and create rooms. Do keep in mind that initiating an action in any of the supported apps will automatically override the lighting settings applied by other apps.

While the feature set is impressive, the actual luminous output of the Mi LED Wi-Fi Smart Bulb is its true USP. The ivory white colour was easy on the eyes when writing or reading a book, while the daylight yellow shade was ideal when working on a computer. The same goes for scenarios such as watching a movie or playing a board game. You have the option to choose the most appropriate colour to reduce the strain on your eyes, and this does make a difference. You don’t have that luxury with a regular LED bulb.​ 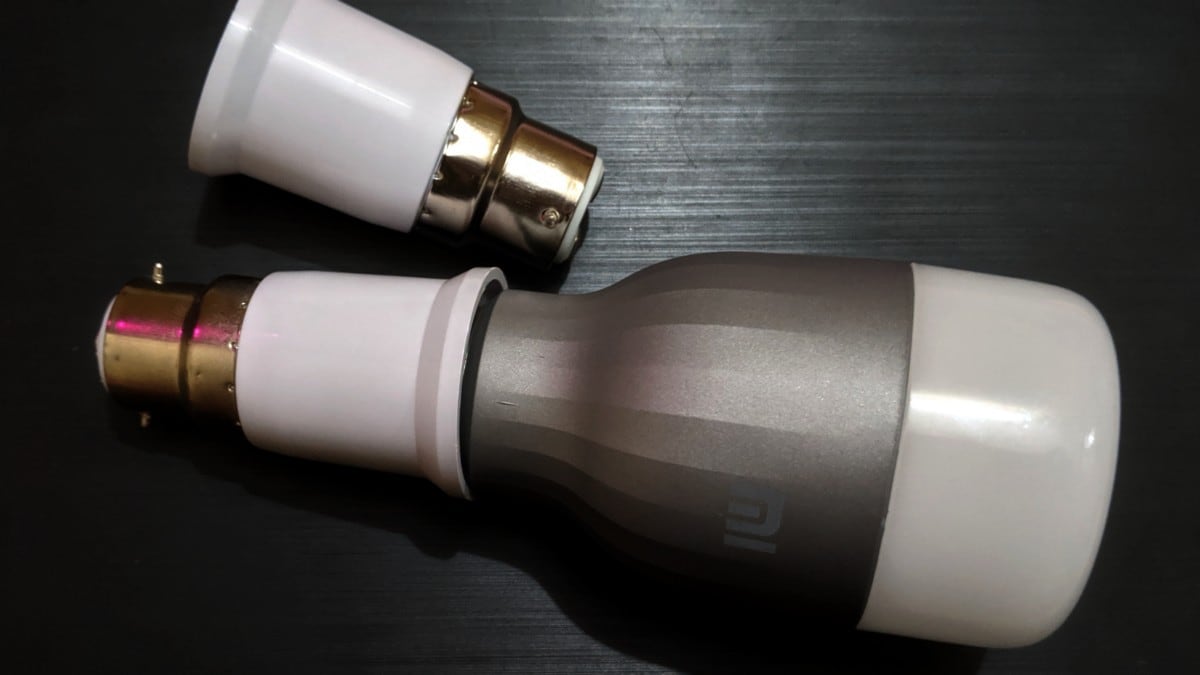 In our opinion, this is the best reason to choose any smart bulb. Add to that the promised product lifespan of 11 years, and the cost would come to just over Rs. 100 per year if lasts a decade — though that’s a big if, and it’s a claim we can’t verify just yet. We have been using the Mi LED Wi-Fi Smart Bulb for around a month, and are impressed by the overall value and convenience offered by it.

The only drawbacks are the lack of support for incoming notifications and the E27 connector, which requires buyers in India to purchase B22 adapters. Even with that added cost, the Mi Smart LED is a great smart home device to bring home or gift to tech-savvy family members and friends.

The sustainability success stories of the week