Well, there you go. Today Nintendo pulled back the curtain on the mysterious ring controller and software it teased last week unveiling Ring Fit Adventure. The controller, imaginatively dubbed the Ring-Con, is used in conjunction with a pair of Joy-Con and the Leg-Strap to navigate through an RPG-style fitness adventure that pits you against an evil bodybuilding dragon named Dragaux and his minions. It’s launching on 18th October for $79.99 (UK pricing TBC). 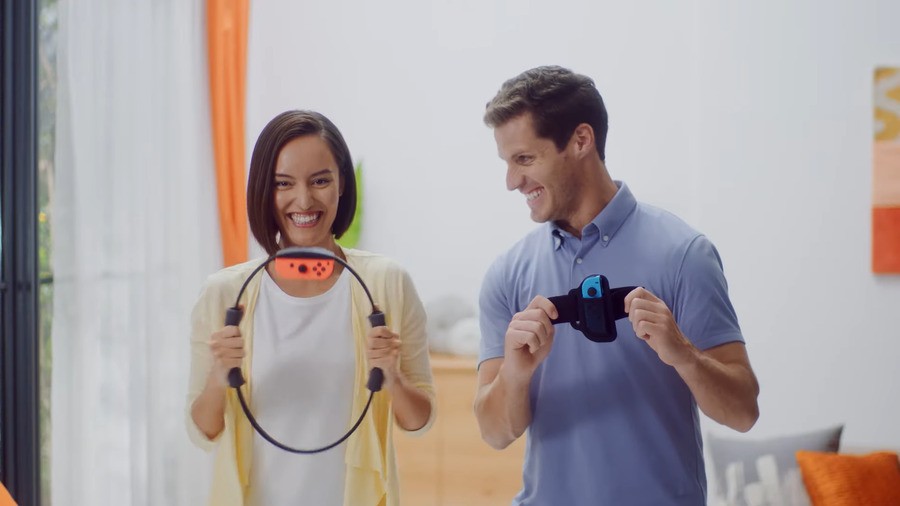 Nespresso machines can be dangerous

Despite the distractingly enthusiastic presenters hosting the video (the guy in particular felt like he was on the edge of something), the seven-and-a-half minute trailer gave a pretty good overview of the game and the sort of experience we can expect.

Essentially, you’ll be jogging, jumping, paddling, flying and squatting your way through twenty worlds unlocking Fit Skills that can be used in RPG-style battles against blobby enemies. You attack and defend with over 40 unlockable skills divided into four colour-coded categories: arms, abs, legs and ‘yoga’. Different enemies are susceptible to specific attacks, so if you want to triumph over these beasties, there’s no avoiding a full workout rather than just doing your favourites.

When you’re not battling you jog around an attractive world on a fixed path between destinations. Squeezing the Ring-Con creates a gust of air in-game which you can use to collect things or jump if you aim towards the ground. While fitness is an obvious element of the software, there was an overwhelming focus on the ‘journey’ the game will offer. The intention is stated plainly in the PR blurb:

Adventure mode is designed as a natural way to motivate players to keep playing and exercising regularly, progressing through the game world while also levelling up their real-world fitness.

We discussed last week about Nintendo wanting to have its cake and eat it with this peripheral, and although Ring Fit Adventure is all fun and games, there’s no denying that the software leans heavily on the keep-fit aspect, too – more than we expected. It’s right there in the name. However, you’re not staring at a blank-faced mannequin here – there’s colour and character to spare, and it’s that which is being used to masquerade the exercise and broaden the appeal. The sectioned-off minigames in Wii Fit have spilled out into the main mode and, although minigames still exist, the core of this software is the ‘adventure’. There’s been a concerted effort to integrate the ‘fun stuff’ with the exercise component.

The RPG-style levelling and questing brought to mind the lighthearted ‘adventure’ of the Streetpass Quest games in the way it took the chivalry and pomp of epic fantasy and juxtaposed it with the everyday context of your goofy Mii. Here Nintendo is doing the same, but with Wii Fit Trainer. Yes, you’re going on an ‘epic’ journey, but you’re doing it in your slacks in front of the telly while jigging about with a bendy ring. Ring Fit Adventure borrows more from traditional games to disguise the exercise better than Wii Fit‘s sterile approach tended to. Nintendo Land also popped into our mind as the trailer played out – perhaps it was something in the mix of lighthearted, active gameplay that triggered a memory.

There are other things beside the main game. Minigames, Quick Play mode, Simple and Sets – there’s even a special Silent Mode if you don’t want to annoy the neighbours with your incessant jogging on the spot. It’s not going to be for everyone, and anybody who feels like they were tricked into any of Nintendo’s previous forays into fitness would be wise to exercise caution, but Ring Fit Adventure appears to take keep-fit gamification to a whole new level.

Until we try it out ourselves it’s impossible to know how successful this hybridisation will be. It’s a little odd to see this launching in such close proximity to Switch Lite which, although technically compatible from a software perspective, lacks detachable Joy-Con, a kickstand for tabletop mode or the ability to dock with your TV. Regardless, for our part Nintendo has done just enough to pique our interest by turning our workouts into turn-based battles with RPG stats and progression. After having a good time with Fitness Boxing, the lessons learned from the Wii era may yet produce something uniquely engaging in Ring Fit Adventure.

We doubt it’s humanly possible to enjoy it as much as the presenters appeared to, but we’re intrigued to see if Nintendo can successfully incorporate a worthy and engrossing ‘game’ component with a keep-fit regimen. Making people forget they’re exercising must be the holy grail of fitness software, but unfortunately working out (if you’re doing it properly) is damn hard work! We can’t think of anyone better at distracting us than Nintendo, but it’s got its work cut out if this Ring-Con isn’t to find itself slung in the wardrobe with our discarded Balance Boards and assorted paraphernalia.

What do you think? Are you interested in Ring Fit Adventure? Do you reckon it’s more ‘game’ or ‘fitness software’? Join our polls by clicking the option that best fits you below and clicking the ‘Vote button.

If Wii Fit Trainer isn’t an unlockable character, we’ll be most displeased. Be sure to check out our gallery of images to get a better idea of the belly-busting world of Ring Fit Adventure and let us know your thoughts on Nintendo’s latest effort to banish the bulge below.

When both drivers are in error, people blame the computerized one more