After debuting and focusing on activity trackers, Misfit was bought by Fossil and started expanding its portfolio a few years ago to include smartwatches. Its efforts have been mitigated though, and those familiar enough with the Wear OS landscape have noticed how late to the game Misfit’s releases have often been.

The first Vapor garnered a lot of hype but lost most of its shine by the time it was finally released. The Vapor 2 came a year later, added the missing NFC and GPS, but was still using an older Snapdragon Wear 2100 processor. This time around, the Vapor X corrects that last misstep but still feels outdated thanks to 512MB of RAM — the same specs as last year’s Fossil Sport — instead of the 1GB of RAM we find in Fossil’s newer Gen 5 watches. That’s really a shame because, from a design perspective, the Vapor X is a sleek watch that’s a pleasure to wear and look at.

Hardware, design, what’s in the box

I usually steer away from black watches with black straps, thinking they look too manly and dull. This isn’t the color combination I would’ve picked, but I’m glad I didn’t have a choice as the review unit I received is all black and it looks dashing. It’s simple, sleek, a little inconspicuous if you don’t focus on it, but very, very elegant once you notice it. With the right watchfaces, it can easily match a sporty look or a more formal one. If you’re not a fan of the stealth design, there are four other options to choose from and multiple strap colors.

Beside the glass top, which houses a 1.2″ AMOLED display, the body is made of a lightweight aluminum alloy with a soft matte finish. It looks nice and feels even nicer to the touch. The crown acts as a scrolling wheel and is flanked by two other customizable buttons. By default, one of them points to Google Pay, but you can change them to launch any app or activity you want, including quick access to the now playing music screen to control playback.

The back of the watch houses the heart rate sensor in the middle and charging rings. My previous smartwatches have either had pins I had to precisely align or no pins, so I wasn’t familiar with this charging process. It works well though: The charger has two pins, but thanks to the rings, you can place the watch in any orientation and it’ll start filling up. 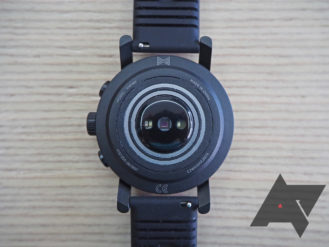 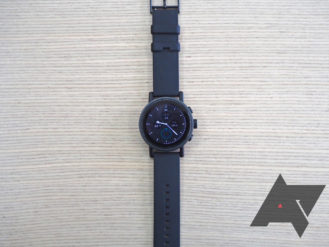 Misfit made a special effort with the Vapor X’s band (or Sport Strap+ if you want to use the proper noun). It’s a quick-release 20mm strap made of smooth, matte, flexible rubber, with plenty of nice little touches. Underside ridges help with breathability, a little nub stops the free loops from wandering away and loosening the watch, and even the buckle has a quick-release pin. 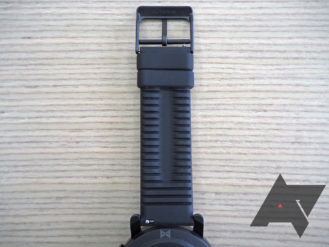 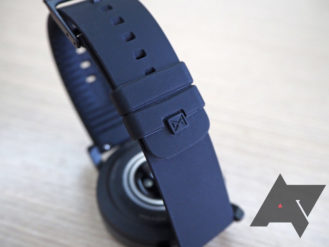 Even though I have relatively small wrists, the watch’s 42mm body doesn’t feel large or heavy on my wrist and I am very comfortable wearing it for a full day. 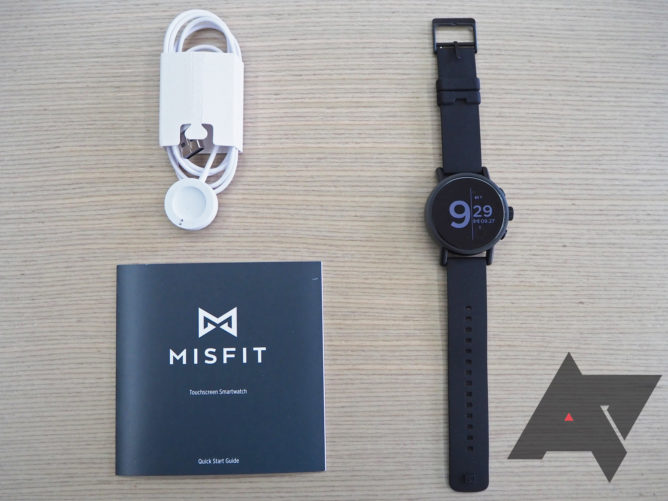 In the box, you get the essentials: the Vapox X, USB charging cable, and quick start guide.

Wear OS’s latest iteration is one of its best yet, though it’s still far from perfect. The four-way swipes on the homescreen to get to quick settings, Assistant, notifications, and tiles are handy, though proper support for third-party tiles should have rolled out a long time ago. If Spotify or Keep had a tile, for example, I wouldn’t have to wait for the app to load each time I opened it.

Other issues include a Weather app stuck on Fahrenheit regardless of any settings I change on my phone and watch, no way to reset the built-in watchfaces to their default settings, and an inconsistent Assistant experience that can go from very smooth to very laggy in the span of a second. It’s also awkward to use the crown for scrolling then have to move the finger to tap/swipe the screen for selecting or backing out of things. The interaction can be much more natural if a press of the crown selected the current item and a long press went back. 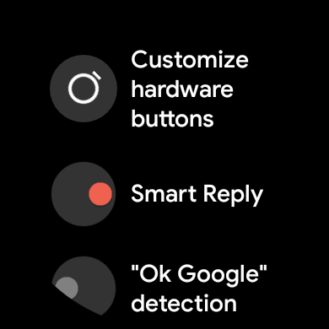 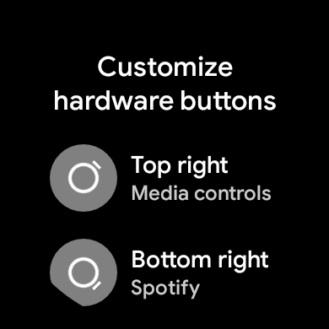 Putting the negatives aside, my three favorite aspects of Wear OS will always be the customizable watchfaces, notification management, and music controls. I love finding new designs for my watch and switching every few days, I like that I can pause and skip through music without having to unlock my phone, and I find notifications very handy in my everyday life. My work as a pharmacist requires a calm, undisturbed environment and, since I get dozens, if not hundreds, of messages a day on WhatsApp, Slack, and Gmail, I prefer to keep my phone on Do Not Disturb. The only way I can know I’ve received a message is through a connected gizmo of some sort, or if I keep glancing at my phone every few seconds. That’s why I like having notifications on my wrist, and Wear OS has been my favorite at handling them so far (compared to Garmin, Fitbit, Mi Band, Honor Band). Smart replies are often enough to quickly handle a message and, if not, I can always dictate a message or send an emoji. 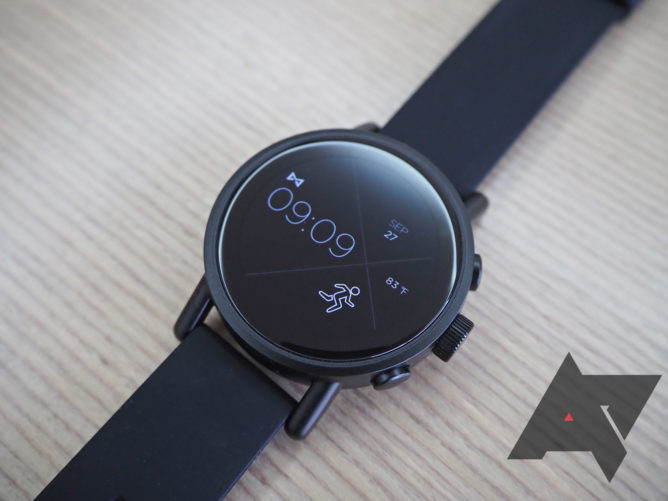 Aside from Wear OS’s quirks, my biggest disappointment with the Vapor X stems from its hardware components. Despite being part of the same company, Misfit is using the same internals as last year’s Fossil Sport, which means half the RAM and storage as the newer Fossil Gen 5, and no speaker. The watch still stutters and lags several times a day, and is slow at loading any app. We know that the mere jump to 1GB of RAM remedied most of those issues on the Fossil Gen 5, so it baffles me that Misfit thought it wise to stick to the older hardware configuration.

Although the Vapor X uses Qualcomm’s new(er) Snapdragon Wear 3100 platform, it doesn’t benefit from Fossil’s battery mode optimizations on top of it. Misfit’s product page mentions “multiple battery modes,” but the only option I get when I tap the battery icon in quick settings is the Battery Saver Mode. It can be enabled manually or it turns on automatically at 9% and turns off everything beside the watch part. In that time telling-only mode, the battery can last two more days. In regular use though, the battery lasts me a day and a half. I’m sure I could stretch it to two if I turned off ambient mode. 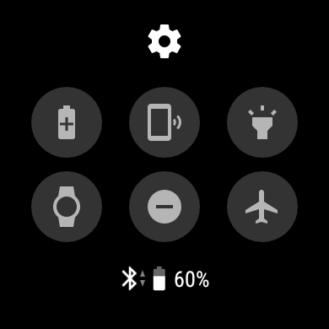 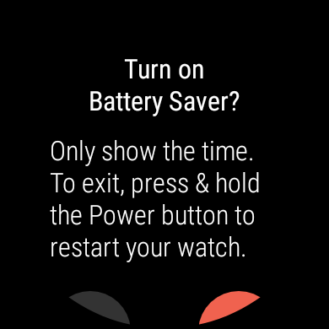 What surprised me most though about the Vapor X was the lack of any proper Misfit features. If you’re buying this smartwatch and not another one, it’s because you likely associate the brand with activity and sleep tracking. Yet the only included software for that purpose is Google Fit. There’s no built-in sleep tracking or swim tracking, you have to rely on third-party software to do that. Given the Misfit brand, this is disappointing.

No. Placed in Misfit’s own vacuum, the Vapor X is an improvement over its predecessors. It has GPS, Google Pay, a better processor, two customizable pushers, and a super lightweight and comfortable design. It also works well enough in general. But in the larger smartwatch space, both its specs and price appear to be tone-deaf.

As much as it pains me to say this, given how much I like the Vapor X’s look, it shouldn’t be near the top of your general smartwatch purchase list, let alone Wear OS list. At only $15 more, the Fossil Gen 5 is a much better buy and comes in several styles, while Armani, Diesel, and plenty of Fossil brands are soon coming out with their own watches based on the same Wear 3100/1GB RAM/8GB storage specs. They’re all likely to provide a better experience than the Vapor X.

Looking outside of the Wear OS bubble, the cheaper $200 Galaxy Watch Active is an excellent choice thanks to longer battery life and better optimized software, whereas the newer Watch Active2 adds a touch-sensitive bezel and still manages to be priced around the same $280 as the Vapor X. Other competitors include Garmin’s impressive new Vivoactive 4 and the Amazfit Stratos 3, both of which can last more than a week on a charge and have more extensive activity tracking abilities. 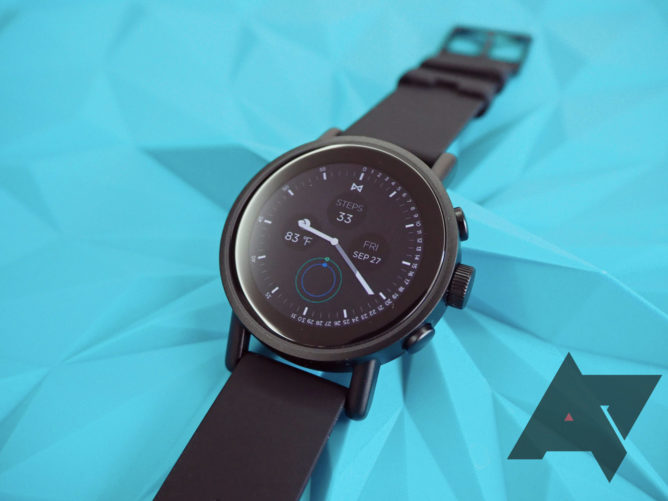