Garmin added a ton of fitness improvements to this watch, including optional all-day pulse ox measurements, hydration tracking, new breathing exercises (that don’t suck), new custom workouts, on-screen animations, and more. Unsurprisingly, all those improvements add up to the Vivoactive 4’s $349 starting price, which is at least $100 more than what the Vivoactive 3 Music goes for nowadays.

Those features add a lot of value and push the Vivoactive 4 ahead of even the Apple Watch in terms of fitness, but I still have a soft spot for the Vivoactive 3 series—and plenty of happy users may skip this upgrade.

I tested the 40mm Vivoactive 4s and immediately noticed the newly added sleek-and-shiny touches on the watch’s case. The circumference now has a thin casing of metal, and the two side buttons are metal as well. The Vivoactive 4s includes an additional side button for lap, back, and menu access. While it took a few tries to get used to the new input method, I was able to navigate the watch using that side button, the other side button, and the color touchscreen fairly easily.

The display itself is a backlit, transflective memory-in-pixel panel, which, in comparison to LCD panels, uses technology that allows it to consume less power. That’s one of the hardware factors that lets the Vivoactive 4s get up to seven days of battery life (by Garmin’s estimation). It has essentially the same quality as previous Vivoactive displays, so the watch face is always visible, and you won’t have trouble reading it while running outside in the sun.

While familiar, this display is in stark contrast to the AMOLED panel on the new Garmin Venu smartwatch, which was announced at the same time as the Vivoactive 4 series. That device, however, starts at $399 due not only to its AMOLED panel, but also for some additional features that aren’t present on Vivoactive 4 devices (keep an eye out for Ars’ review of the Venu in the coming weeks). Thanks to that big hardware difference, the Venu will more closely compare to the Apple Watch Series 5. 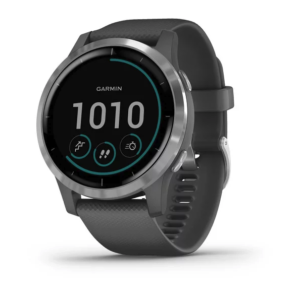 (Ars Technica may earn compensation for sales from links on this post through affiliate programs.)

The Vivoactive 4s is packed full of fitness-tracking sensors: accelerometer, gyroscope, altimeter, optical heart rate monitor, onboard GPS/Galileo/GLONASS, pulse ox, compass, and a thermometer. Both the heart rate monitor and the GPS have been updated with new sensors, so they should be even more accurate and more efficient than those in previous Garmin wearables. There’s also storage space on the Vivoactive 4s for music, and all Vivoactive 4 smartwatches have onboard music storage as a standard feature. That means you won’t pay extra for it like you had to when Garmin first introduced the Vivoactive 3 Music after the Vivoactive 3 had been available for a little while.

Garmin has improved its devices significantly over the past year or two when it comes to music storage. I had a “better late than never” attitude when Garmin finally added music storage to some of its wearables, and I was pleasantly surprised to see that the desktop interface for transferring tracks wasn’t as horrid as those of other smartwatch makers. Since then, Garmin has added support for downloading tracks and playlists from Deezer, iHeartRadio, Spotify, and Amazon Prime Music, so paying subscribers can download music to listen to while running (and using a pair of connected Bluetooth headphones) without their smartphones present.

Overall, I’d argue Garmin has a better system for downloading and playing music from a smartwatch than Apple has and, therefore, the rest of the competition as well. While Apple makes it incredibly easy to pick tracks to sync and play music on its watches, you’re limited to the music and other audio you have in your iTunes account and Apple Music (if you subscribe to the latter). LTE-equipped Apple Watches also make it easy to stream Apple Music playlists while working out. But users aren’t locked into one ecosystem with Garmin, and I’ll always prefer that flexibility over the alternative. Unfortunately, though, that means we will likely wait a long time for Apple Music integration to arrive on Garmin smartwatches—if it ever happens at all.

There are a lot of new fitness features on the Vivoactive 4s, but let’s start by talking about one that directly affects battery life: optional all-day pulse ox. The pulse ox sensor inside the Vivoactive 4s allows it to measure the level of oxygen in your blood based off of the heart rate and breathing data it collects. Most healthy people will see a pulse ox percentage close to 100 in the Garmin Connect app after the pulse ox sensors gather enough data, but percentages dramatically lower than that could signal health problems. Like most consumer wearables on the market today, the Vivoactive 4s isn’t a medical device, but it can capture useful information that users can share with their doctors who can then decide if there’s a problem that needs to be addressed.

Previous versions of Garmin devices like the Vivosmart 4 could measure pulse ox on the fly or during sleep to capture more data over the course of the night. Now, if you enable continued, all-day pulse ox measurements, the Vivoactive 4 will periodically take readings throughout the day.

But this constant monitoring will dramatically reduce battery life, and unless you have a known problem with your blood oxygen levels that you want to monitor in a new way, I wouldn’t recommend it. For the first few days of testing the Vivoactive 4s, I enabled pulse ox during sleep, and I got roughly four days and four nights of battery life out of the smartwatch. That’s a little more than half of Garmin’s estimated battery life for the device in smartwatch mode (up to seven days). It’s still a good battery life for a wearable by normal standards, but you will have to charge the Vivoactive 4s about twice a week if you choose to enable pulse ox while sleeping.

I still believe pulse ox information isn’t necessary for most users, but it’s encouraging to see Garmin include a pulse ox sensor in nearly all of its new wearables and actually use it. Fitbit has been touting the pulse ox sensor found in almost all of its wearables introduced since the Ionic, but the sensor isn’t active in any Fitbit devices—and there’s no telling when Fitbit will put it to use.

AirPods vs. AirPods Pro vs. Powerbeats Pro – Which wireless earbuds are best for you? – Macworld