These days, it’s not challenging to find a phone that’s powerful enough to run most games on the App Store or Google Play Store, nor is it too costly. It’s also easy to buy a DualShock 4 or Xbox One gamepad, then pair it to your phone via Bluetooth so you can have a console-like controller experience without being glued to your couch.

Both of those points make it very hard for me to convince anyone to buy the Asus ROG Phone II, an $899 gaming-focused phone that has its own ecosystem of pricey proprietary accessories. The accessories were made for the phone, and the phone was made for these accessories, for better and worse. 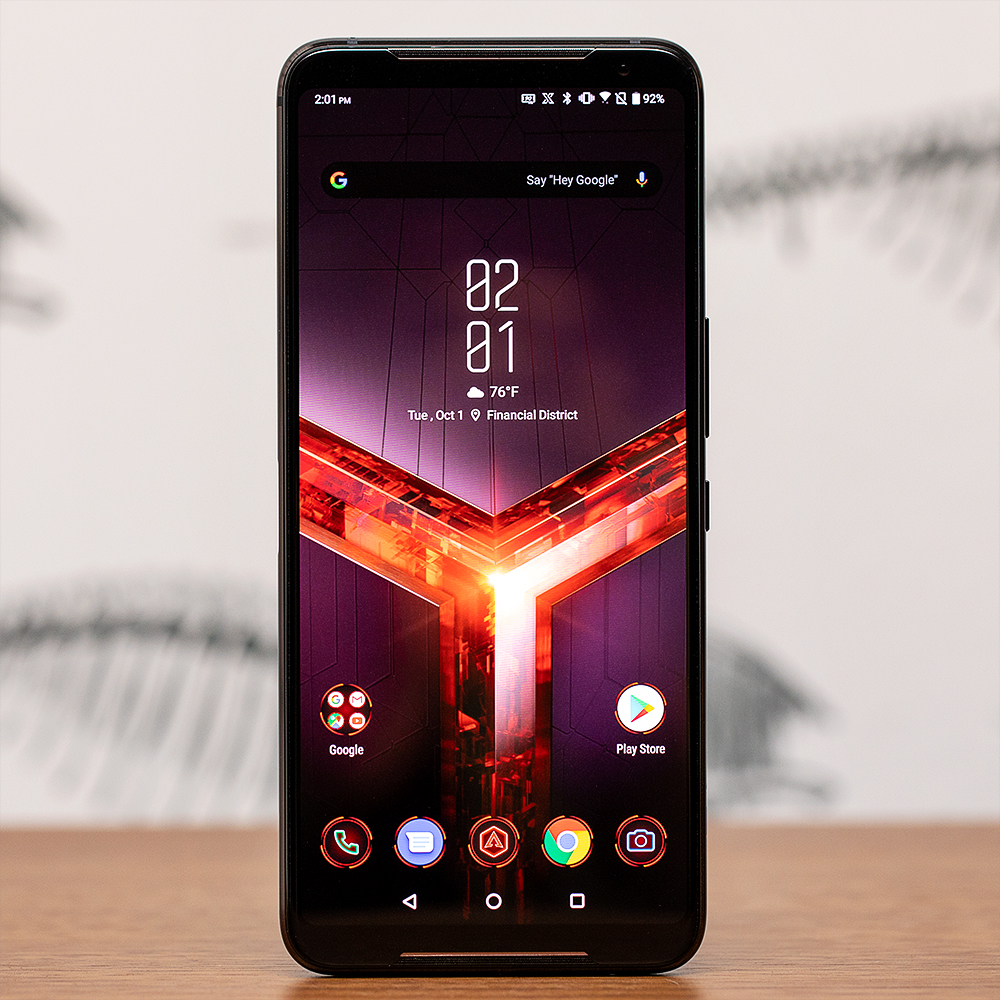 It costs a lot of money to unlock the potential of this phone, but there are quite a few things that I like about the device on its own. It has three USB-C ports: one on its bottom and two joined together along its side. Two of them can be used to charge the phone, while the other is exclusively for Asus’ accessories, and it’s marked orange to indicate that. It’s thoughtful of Asus, especially since this is primarily a gaming phone, to mount a USB-C charge port in a place that won’t distract you while you’re playing games in landscape mode.

The ROG Phone II is one of the most powerful phones that you can buy, and it’s easy to see the results of this hardware in action. There’s absolutely no slowdown while using apps and games, and switching between them is nearly instantaneous. A few things inside of the phone contribute to that: the Snapdragon 855 Plus processor that was created to be faster and more efficient during gaming, the speedy UFS 3.0 storage, and its 12GB of RAM.

Everything looks fantastic on the ROG Phone II’s large 6.6-inch 1080 x 2340 HDR OLED screen. It has a 120Hz refresh rate, which allows for smooth in-motion visuals and seamless scrolling. This is a technology that I think is essential for gaming, whether you’re doing it on a phone or a PC. Each time I went back to using my personal Pixel 3, I missed looking at the ROG Phone II.

This phone’s 120Hz refresh rate display is fun to use, but it’s only as good as the content that supports it. Thankfully, there are plenty of games from the Google Play Store that are optimized to run at up to 120 frames per second. A few popular examples include Alto’s Odyssey (and its predecessor, Alto’s Adventure), Don’t Starve, DOTA Underlords, Minecraft, and Rayman Adventures. Asus seems to be adding more titles and compiling them on its site.

Lastly, I love the AirTriggers feature. While you’re in game in landscape mode, there are two touch-sensitive areas near the power and volume buttons that act like triggers on a controller. This feature can be switched on through Asus’ Armoury Crate app, its console-like dashboard that comes preinstalled on the phone.

Once you activate it, you pick a place on the screen where each AirTrigger will virtually tap on a per-game basis. This allows you to designate a button to one of these triggers, so you don’t need to reach to press an annoying-to-reach on-screen button. I didn’t think alternative phone controls could get any more creative than the Black Shark 2’s MagicTouch feature, but this outdoes it handily.

The phone comes with a thin case as well as the AeroActive Cooler 2 detailed below. There are seven additional accessories that you can buy separately. If you buy every accessory made for the ROG Phone II, it will cost you $1,996.97, including the cost of the $899 phone. Let’s run through them, what they do, and how much they cost.

The ROG Phone II is a powerhouse when it comes to performance. I detailed above that several games support its 120Hz refresh rate display, and, as I expected, this Asus phone has no issue running anything without the slightest hint of a slowdown. PUBG Mobile runs flawlessly with all of the graphical settings pushed to their limits (though, unfortunately, this title is locked at 60Hz).

Other demanding titles, like Dead Trigger 2 and Final Fantasy XV: Pocket Edition also ran beautifully — especially so thanks to their support for its 120Hz refresh rate display. From a technical standpoint, this phone should have no problem keeping up with advancements in mobile graphics for some time.

Asus’ focus for this device is obviously on gaming, but I also ran through the paces of how it fares with regular phone stuff. The look and feel of the software can be switched between Zen UI, which is close in its look and feel to stock Android 9 Pie and Asus’ ROG UI. There aren’t many functional differences to speak of, but if you’re a fan of the edgy gaming hardware aesthetic found on my gaming PC accessories (which also happens to be what the ROG Phone II looks like), the ROG-themed option will likely suit you. It swaps the bright, sunny Zen UI theme, and all of its app icons, out for a darker, aggressive styling.

If you have deep pockets (both to fit the phone and to afford it), the ROG Phone II may fit into your pants pocket, but it probably won’t be too comfortable. This phone is a large presence, whether it’s in your pocket or your hands. (I say “hands” because, for most people, it will require two to hold and operate it.) It’s both large and heavy, weighing 240 grams, which is about 16 grams heavier than the already-beefy iPhone 11 Pro Max. Asus at least justifies its weighty build with a 6,000mAh battery. This phone routinely lasts two to three days with mixed use, even with the display set to 120Hz refresh rate. Granted, the results were usually less impressive if I played more games than usual. But considering all the power inside of this phone, it lasts for a surprisingly long time.

Something that I was worried about, at least at first, was its optical in-display fingerprint sensor. Our experience with both ultrasonic and optical, so far, has translated to slower, more error-prone authentication than the dedicated fingerprint sensors located on a phone’s side or back. But surprisingly, this one is easy and fast to use.

The ROG Phone II is capable of a lot, generally speaking, but its cameras are its weakest point. It has a dual-lens camera system on its back, comprised of a 48MP main lens and a 13MP 125-degree wide angle lens. The same Sony IMX586 image sensor that we saw in the Asus ZenFone 6 makes another appearance here. It puts out image quality that I think is better than passable in both day and night shots, but it doesn’t meet my expectations for a phone that costs $899.

These results are more palatable in the cheaper ZenFone 6, and, apparently, the Honor View 20’s “AI Ultra Clarity” mode squeezes even more out of this sensor, coming close to rivaling the iPhone XS Max in a shootout. But again, this phone wasn’t made for taking photos, so I wasn’t expecting anything phenomenal.

Whether the ROG Phone II is a fit for you doesn’t rest on you being a gamer who’s looking for the right kind of phone. If all that you want is an Android phone with a fast-refreshing display and capable specs, the new OnePlus 7T will likely suit most, if not all, of your needs for a lot less money. As I mentioned earlier, it’s possible that your current phone might be powerful enough to handle most games already, and if it’s an iPhone with iOS 13 installed, it has native support for PS4 and Xbox One controllers.

Asus’ ambitious gaming phone offers a lot of power for $899, and thanks to its accessories, it’s capable of more than almost any other phone out there. There’s an audience for this kind of package, but for most people, it probably comes with too many compromises. It’s big, heavy, and you’ll need to spend hundreds to see some of that potential as a portable gaming console come to fruition.

When should you expect to get it? (Updated Nov. 1)