Oh, so you thought Blizzard suspending pro Hearthstone player ‘Blitzchung’ after the Chinese pro gamer announced his support for the Hong Kong protests was bad. How about a 1000-year ban from the Blizzard forums? Yep, Blizzard have slammed forum users with 1000 year bans if they dare speak up about Hong Kong and the current censorship in China. Blizzard are blanketing the ban with the excuse that the 1000-year account suspension is because of “trolling” with members unable to post until October 3018. Yes, that’s not a typo. Anyone who is banned now can’t post on the Blizzard forums until the year 3019, in which they’ll (and many generations after them) will be long gone.

At this point, it’s hard to fathom how Blizzard could dig a hole any deeper — enforcing 1000-year bans from their forums is absolutely ridiculous and serves no real purpose. Unless, you’re on your knees to China like countless companies are (here’s a list of them so far). They say you know who your boss is when you can’t criticize them, in this case — your boss is China, and unlike the PUBG lobby, China is not #1. 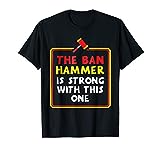 The Ban Hammer Is Strong With This One T-shirt

Emulator uses AI to offer the translations your games never had

The untold origin story of an AmazonBasics AA battery