Canon has officially announced the launch of its new IVY REC wearable “activity camera,” and everything about it is slightly bizarre: the marketing, the design, its purpose, and its intended market. Who is it for, and will you be buying one?

According to the press release, the Canon IVY REC is a wearable, waterproof (with an asterisk), shockproof (with two asterisks) activity camera — notably, not an “action camera” — that is “fun and easy to use,” backed up with marketing that involves a lot of young people wearing bright colors to match the IVY REC’s bold design.

The camera shoots 1080p up to 60 fps along with 13-megapixel stills, but more important is its WiFi and Bluetooth connectivity, allowing the smartphone to function as a viewfinder and enabling “social media savvy users” (a.k.a. children) to share images and footage using the Canon Mini Cam app (three asterisks).

An App to Slap

The Canon Mini Cam app is not yet available on the App Store or Google Play, and you have to hope that Canon is about to release something more user-friendly than the Canon Camera Connect app that barely musters two stars and has drawn a slew of comments describing how awful it is to use. Connectivity has been an area where camera manufacturers have dragged their feet in the last decade, a fact that in part explains why their sales have plummeted.

Surely, Canon has finally designed better means of connecting a smartphone, though I’m not particularly optimistic given that the launch video for the EOS M200 — a camera that’s intended as a step-up from a smartphone, but for adults — shows that the process still looks somewhat daunting, not helped by the fact that Canon believes that a convenient “nickname” for a device can be “EOSM200_C64D7.” Note to Canon: if a nickname is longer than the device’s actual name, is not pronounceable, and contains randomly generated characters, it is not a nickname.

One of the most bizarre aspects of this camera’s launch is how it has been brought to market. Why would a well-established company such as Canon have to turn to crowdfunding in order to develop a product? The now-completed campaign on Indiegogo shows that 522 perks were claimed and appears to have raised just shy of $60,000 — surely a sum that is small change for a corporate multinational such as Canon. No doubt the development of such a product has cost significantly more than the funds raised through Indiegogo, so this might be more of an experiment in customer relations than a concerted effort to find a means of developing new products.

I’m trying to imagine any other established camera manufacturer going this route, and it’s genuinely difficult. I’m split between respecting Canon for trying something new while also feeling a little bit embarrassed for them.

The marketing is also somewhat surreal for Canon, a company that is far more comfortable creating heavy, expensive, complicated boxes for men who like heavy, expensive, complicated boxes. The company’s efforts to broaden its customer appeal is entertaining to watch, as demonstrated by the recently launched EOS M200, which appears to be targeted at non-tech-savvy customers who like flowers and looking pretty (a.k.a. “women”). Watching a staid and conservative company make efforts to go after a youth market is often fascinating, but Canon appears to have done a good job here, unashamedly embracing bright colors and emphasizing fun and accessibility.

What Is It and Who Is It For?

It’s difficult to put the IVY REC into a category, filling that strange, un-evolved slot alongside the likes of Google Glass and wearable cameras, while not intended to be always-on. Rather than call it an “action cam,” the IVY REC is being described as an “activity cam,” designed for those moments when you don’t want to risk soaking or smashing your phone. 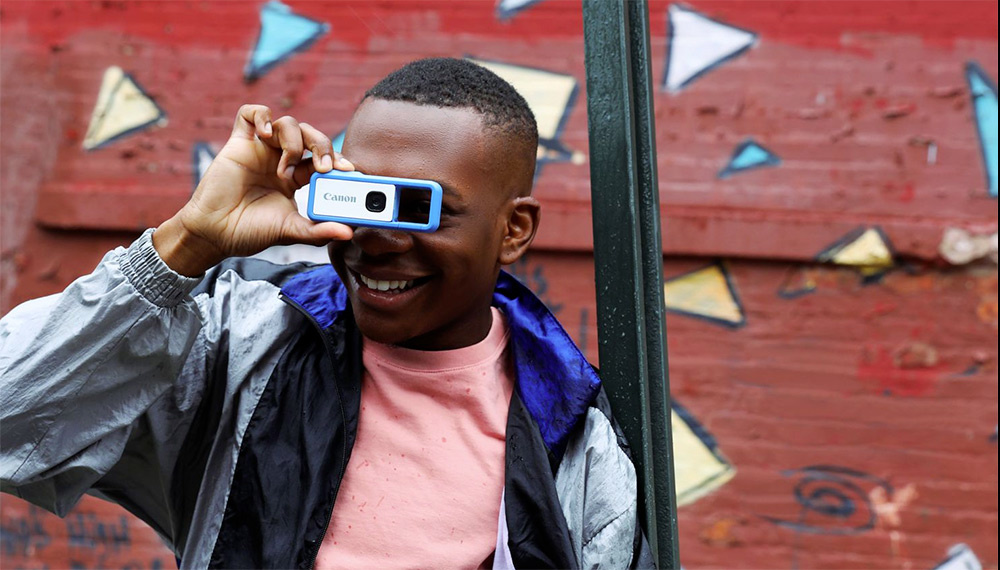 This is a camera that you pick up and use deliberately rather than endlessly recording life from wherever you’ve attached it. As a concept, it strikes me as both logical and innovative though it’s hard to foresee how often a person (however young) would want to put down their phone and grab an IVY REC. At the beach or swimming pool, maybe, but beyond that? It’s hard to say. If you can’t instantly see what you’re shooting, and can’t instantly review what you’ve shot without picking up another device, is an activity cam really worth the effort over a rugged housing for your smartphone?

I can’t pretend to know what kids want, but I’m trying to imagine a 13-year-old version of myself owning, say, an iPhone 6. I’d much rather my parents bought me waterproof, shockproof housing rather than a camera that had no screen and required me to navigate an unnecessarily fiddly process to copy stuff to the device I’d rather be shooting with anyway. Perhaps this is for users who are so young that they don’t own a smartphone, but how big a market is that for Canon to make something so specific? This might account for the surreal crowdfunding experiment.

Ultimately, its success could come down to how easy it is to manage footage and photos. The barrier that sits between the IVY REC’s media and the internet is vast when it comes to convenience, and if the app doesn’t make the experience completely seamless — an area where Canon’s reputation, like pretty much all camera manufacturers, is truly terrible — this camera will be purchased as a gift by parents to then sit in a drawer, because a smartphone does so much more so much faster.

Would you buy your child an IVY REC? And should Canon be using crowdfunding as a means of developing slightly obscure but somewhat innovative products? Leave your thoughts in the comments below.

The Spruce Goose flies again – in a watch