With the clocks turning back this weekend, nights will draw in earlier and unfortunately, that means households are more likely to be burgled.

Theft insurance claims increase by 34 per cent during the winter months, research from Co-Op Insurance has revealed with bonfire night alone seeing an increase of 42 per cent in burglary claims, according to Aviva Insurance.

One reason for the increase is that many do not do the necessary household checks before they leave the home, new research has warned.

More than a quarter have little to no security precautions at home, according to data from national home security month, with 5 per cent of all UK burglaries taking place thanks to an unlocked door. 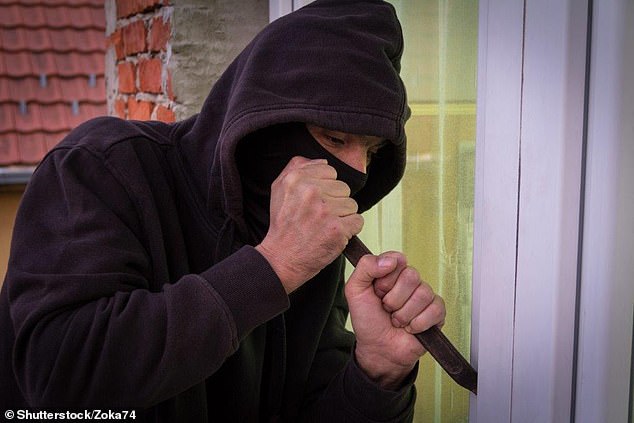 National home security month, which is currently taking place and sponsored by Yale, is trying to raise awareness of home safety and security, especially during the winter months.

The initiative wants people to understand and consider taking steps to protect their home from unwanted intruders including installing new security equipment.

In order to help readers keep their households safe and secure, This is Money, alongside recommendations from hardware retailer Robert Dyas, has put together a security checklist to help families identify and combat any home security flaws.

Shuf Shah, senior buyer at Robert Dyas, said: ‘When it comes to security, keeping our homes and families safe is the number one priority over the notoriously busy months for house crime.

‘Many of us are unaware of the best solutions to keep our homes safe and secure, so whether you live in a large detached house or a small flat, we’ve got the answer to suit every situation and budget.’

Robert Dyas recommends: To discourage unwanted visitors away from your home, use a Yale high security anti-cut weatherproof padlock 45mm (£8.99) which is ideal for protection and high security, as well as being good for outdoor applications.

The lock is cut-resistant with the strength to resist access from intruders as well as having an anti-pick system which has a five pin mechanism to stop burglars trying to pick their way in.

Alternative option: Alternatively, although a Master Lock pro-series weather tough shrouded padlock 55mm (£34) may set you back more, it is a very heavy duty lock that features a hardened iron shroud which protects the shackle from bolt-cutter attacks.

Another way to deter burglars is to have sensor lights at the front, side and rear of your home.

This can act as a good deterrent to night time thieves as they will be seen should they intrude and, if you have an external camera, they will also be recorded committing a crime. 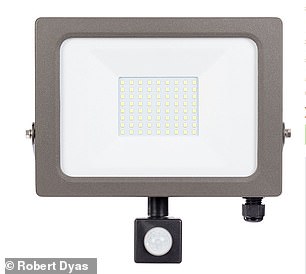 While the lights will be strong, however, the floodlights have a low energy use.

With 89 per cent of ex-burglars admitting they would be deterred from targeting a smart home, according to research by Co-Op Insurance, now could be the time to have new smart home security installed instead.

Alternative option: Those willing to splash out a bit more can opt for the Netatmo presence outdoor security camera (£249.99) which automatically detects movement from people, cars and animals.

As well as lighting up the area, it will send a notification to your smartphone so you can check the location via video link to see whether someone is walking up your drive or if it is just your pet walking up the driveway.

Although having an external light source may be helpful, many thefts are committed in broad daylight so having just outside security is likely not enough to protect your home from potential intruders.

Robert Dyas recommends: For those interested in smart home gadgets, the Yale keyless connected smart door lock with number module (£99.99) could be preferable.

The keyless lock allows users to unlock their door either by using a Pin code, Yale key card, key tag or remote fob, or even from their smartphone if they’re connected to the Yale smart home system.

The clever device is ideal for large families, shared households or apartment buildings as it can be used by as many as 20 users at once with a mix of codes, key tags and cards. 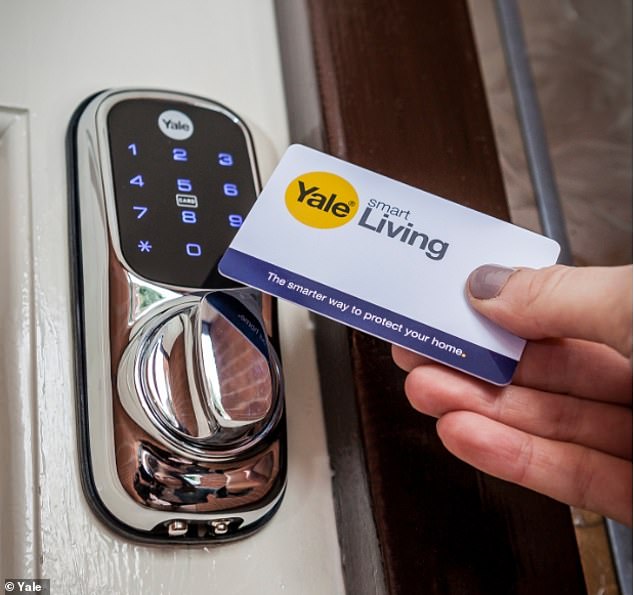 Safety: The Yale keyless lock lets users enter with a pin code, a fob, a key tag or a key card

Users can use their fingerprint to get in, a code, their smartphone, a key or even ‘knock to open’ which means someone entering just has to knock on their phone screen four times to gain entry.

It also has an ‘anti-peep’ password system which allows the user to type in any number of random digits which will still grant them access as long as the one correct password is embedded in the longer set of numbers. This is to stop anyone from seeing what your actual passcode is.

Another popular smart home product is the Ring wi-fi video doorbell 2 (£179) which comes with a motion-activated camera, two-way audio and 1080 HD video so you will always know who’s calling.

It has wi-fi compatibility and mobile access meaning you will be able to see, hear and speak to anyone at your door in real time from your smartphone, tablet or desktop.

The August second generation smart lock (£190) is another option. It offers hands-free access meaning it auto-unlocks when you arrive home and then auto-locks after you’re inside.

For the inside of the home, it could be worth getting a security camera. 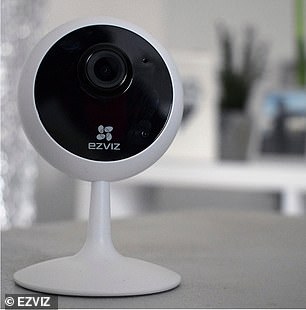 It is compatible with Amazon Alexa and Google Assistant and can be controlled through voice as well as dedicated smartphone apps.

Its motion detector alerts trigger a notification to be sent to your smartphone via the EZVIZ app which is also great for monitoring pets, babies or elderly relatives.

Not only does it record everything it sees, it also has a facial recognition system which means if it sees a face it doesn’t recognise, it will send a notification and picture to your phone.

It can connect to Google Assistant which means if you see someone in your home that shouldn’t be there, you can play out loud a pre-recorded message to them.

To see how other forms of smart home technology can also help you save money and be more environmentally friendly, take a look at This is Money’s article on the best products currently on the market.

Having a burglar alarm is one of the most popular forms of security and most people have one installed.

Robert Dyas recommends: For those who want a high level security, take full control of your property with this Yale sync alarm kit full control (£449) to make sure you know that you’re in safe hands. 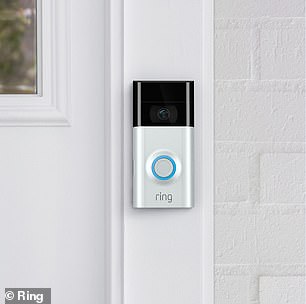 Camera: This Ring doorbell allows users to see who is at the door before they answer it

The geolocation feature reminds you to set the alarm when you’re leaving home, giving you one less thing to worry about. Intelligently connected, the sync alarm works with Philips Hue and Amazon Echo, combining lights, sound, and voice to create the ultimate security deterrent.

Alternative option: Simplisafe has also recently come to the UK after proving popular in the US.

The wireless home security system (from £279) comes with a base station, keypad, a door/window sensor, a motion sensor and a camera.

The base station doubles up as a siren to alert users if anyone should anyone break in and also has an eight hour battery back up should there be a power cut.

The Blink indoor home security system (£109.99) from Amazon is also a good option.

The device has a built in motion sensor alarm which, when triggered, will record the home with wi-fi cameras, send an alert to your smartphone and record a short clip of the event to the cloud.

Once you’ve got all the gadgets and gear sorted to reduce the risk of a burglary, remember the following practical advice when going away on holiday:

● Leave lights on a timer.

● Ask a relative or friend to check on the property.

● Install a smart alarm or indoor and outdoor cameras that can be remotely accessed and controlled via a smartphone.

● Keep all windows shut and locked.

It may be worth considering joining the community organisation Neighbourhood Watch, which is the largest crime prevention movement in England and Wales with 2.3million member households.

Their aim is to create strong, friendly, active communities where crime and anti-social behaviour are less likely to happen. In the event of witnessing a crime, you can always report suspicious behaviour anonymously to Crimestoppers.

For more tips on how to keep your home safe, take a look at This is Money’s article which revealed top tips from locksmiths on how to protect your house from theft.

Does loyalty pay? Listen to the This is Money podcast

What’s the difference between loyalty and inertia? Do we get too little reward for the former and show too much of the latter when it comes to shopping and banking?

It comes as Tesco – one of the original loyalty scheme pioneers – revealed its new paid-for Clubcard Plus, costing £7.99 per month.

Press play above or listen (and please subscribe if you like the podcast) at Apple Podcasts, Acast, Spotify and Audioboom or visit our This is Money Podcast page.

Some links in this article may be affiliate links. If you click on them we may earn a small commission. That helps us fund This Is Money, and keep it free to use. We do not write articles to promote products. We do not allow any commercial relationship to affect our editorial independence.