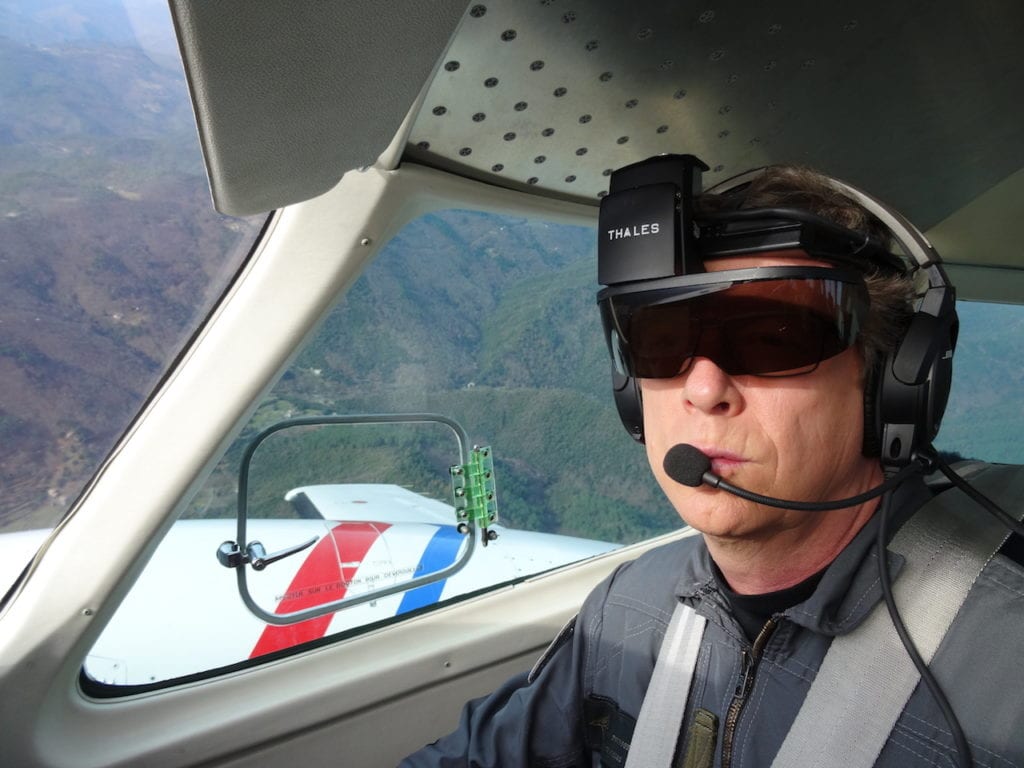 Thales plans on bringing its experience in providing helmet mounted display technology for military pilots to the business jet market with the newly upgraded version of TopMax, which is on track to become the first wearable head up display (HUD) to receive a technical standard order (TSO) and certification for business jet operations.

The initial version of TopMax was first introduced at the 2016 National Business Aviation Association (NBAA) Business Aviation Conference and Exhibition (BACE), and Thales has kept its capabilities relatively the same. However, the form factor and ergonomics of the design has been significantly improved since then based on pilot feedback.

During the NBAA BACE 2019, a group of Thales test pilots and engineers provided Avionics International with a demonstration of the upgraded version of TopMax. It now weighs just over one pound, features an optional visor and the feel of the headset is not as bulky or heavy as the previous version. 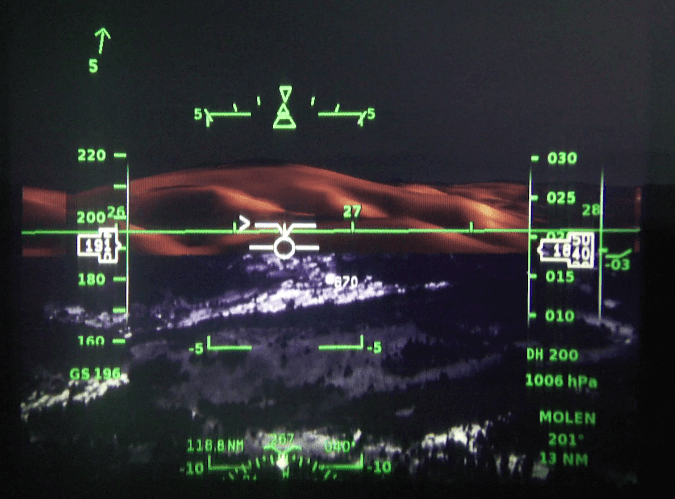 Here is the type of information the pilot sees on the small display that sits in front of their eye when wearing TopMax. This is what combined synthetic vision system and enhanced vision system camera information looks like fused on the display. Photo: Thales

Once the headset is worn, it becomes an intuitive system providing the pilot with effectively all of the same information–such as flight path vector, airspeed, altitude, attitude and waypoints–out ahead as one would see on a head down primary flight display. Thales recommends placing the HUD in front of the pilot’s dominant eye, and the information remains fixed—a 360-degree view of unlimited terrain, cueing functions and an extended virtual head down display constantly within the pilot’s direct line of vision.

Other TopMax features include visualization of cross wind headings, synthetic runway, extended visual centerline and a three-dimensional display of traffic. There is also off-axis symbology, and if the aircraft is equipped to feed ADS-B In traffic to the HUD, the pilot can also see other aircraft in nearby airspace. Synthetic vision system imagery is also visible on the HUD, and it can be coupled with any available enhanced vision system camera as well.

“By wearing the device, we move away from the standard limitation of the head up display with a fixed combiner in front of us. We developed a small ship set for it. All you need is the headset and a small computer that is about the size of an iPhone to enable the functionality,” Yanik Doyon, Thales’ director of sales for TopMax told Avionics International. 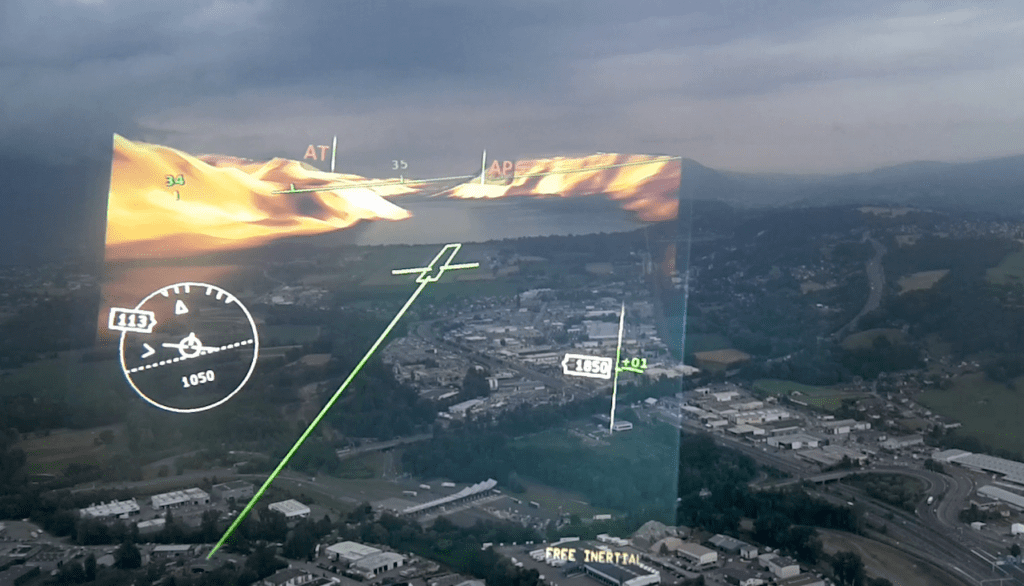 This is what a pilot would see while looking off axis out of the direct view in front of their line of vision. Photo: Thales

One of the unique features of TopMax is also how it will display and raise pilot awareness about important flight environment information, such as how close they are to an upcoming runway or what the aircraft’s heading is if they happen to look to their left or right. Doyon said Thales envisions pilots mainly wearing TopMax during the takeoff, approach and landing phases of flight.

“Head up displays, have a synthetic runway, but only when you’re aligned with the runway, which sort of defeats the purpose,” Doyon said. “On TopMax, if the pilot looks to their left or outside the cockpit, they’ll still see the runway and be able to start their approach to be straightly aligned with the centerline of the runway.”

Doyon said over the last year nearly 200 pilots have tried out the TopMax, some in full flight simulators and other in-flight. He admitted that some civilian pilots trying out TopMax were “reluctant to put something on their head,” and that the new version is the fourth design iteration of TopMax. However, none said it was too bothersome to wear while flying.

Thales will need to work through some regulatory challenges to get TopMax certified and ready to start shipping to customers, as currently the FAA does not actually have a technical standard order (TSO) for wearable HUDs, so the very criteria for that must be developed and met first.

The French manufacturer has partnered with StandardAero in an effort to work toward certification of TopMax for the Bombardier Challenger 350, with other aircraft models planned in the future. FAA certification for TopMax is expected by the end of next year, according to Doyon.

“Certification is ongoing. We’ve defined what needs to be done with the FAA. We feel that head up display-like technology is going to become pretty much standard on almost every new business jet. TopMax is more than just a HUD, and we’re confident we have something that is ready to disrupt the business jet industry,” Doyon said.