The Venu is a 43mm-wide crossover watch, designed to sit in the grey area between fitness watches, where Garmin is strong, and smartwatches, where it isn’t. It’s a Vivoactive 4 with a nicer-looking body and a higher-res display, which is the main selling point. Where the Vivoactive 4 has a 260 x 260 low-power display, the Venu has a 390 x 390 AMOLED touchscreen.

It’s a gorgeous screen, and the live faces are especially pretty. Each pane you swipe through have been given a polish. But the watch doesn’t make the most of it, because the Venu is running Garmin’s stock OS, which is designed for watches with lower-resolution displays. Garmin hasn’t sought to take advantage of the better display to make the information denser, or more useful.

So, like a regular running watch, you have to cycle through any number of cards to get to the stat you need. And, because it’s a fitness watch first, you can get plenty of fine-grain data about your body and your day. Including heart rate, stress, steps, stairs, calories, breaths per minute, pulse oximetry, weather, calendar, phone notifications and hydration levels.

If all of these are added to the carousel, then finding a specific card, like the hydration tracker, is a nightmare. I tried to keep tabs on how much water I’d drank but gave up after half a day, in frustration. If Garmin had compressed some of this data on to a couple of screens and used the touchscreen more, this wouldn’t have happened. 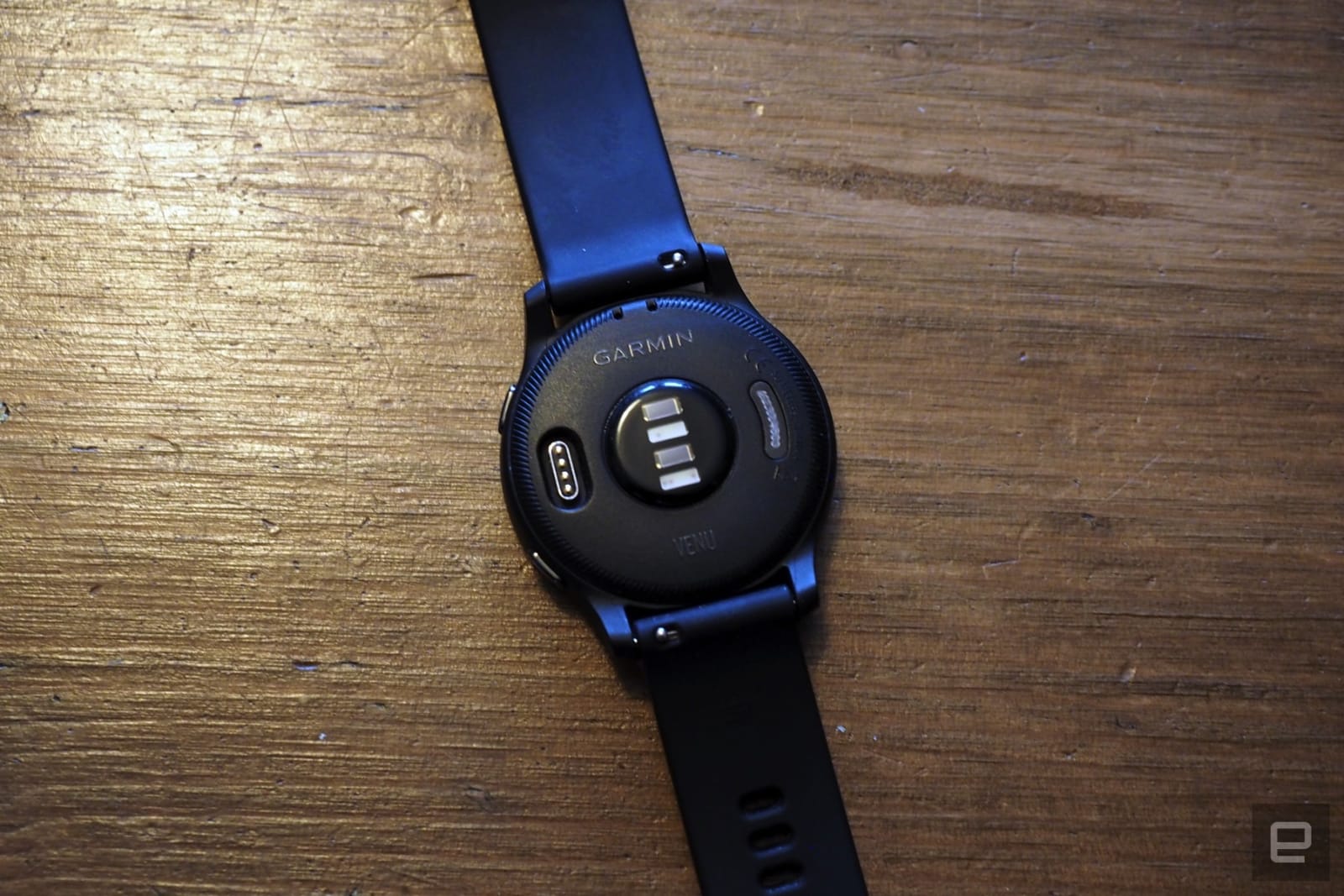 The further you push into smartwatch territory, the more the Venu falls short of what you would expect, especially at this price. Paired with an iOS device, the most you’ll get are notification previews of what’s on-screen, same as with most other wearables. And, if you try and install third-party apps onto the system, you’d better buckle in and hope for good weather and plenty of luck.

I tried to install Spotify onto the watch in order to use offline music and, well, I haven’t been able to yet. There’s a default app you can install, but it doesn’t work, so you have to visit the Garmin Connect store and download one there. Installing and deleting both, twice over, and a couple of restarts, and I finally got access to my playlists via the watch. But actually playing them, or downloading them to my watch, hasn’t happened — something that other users are struggling with. I’ve spoken to Garmin about this, and am waiting for a response.

But I don’t just come here to bury the Venu, I come to praise it as well. When you steer clear from the smartwatch elements, it’s a great device. The GPS is whip-fast to find a signal and, because it’s Garmin, the activity tracking is spot on. Due to the time of year, I’ve been using my rowing machine a lot, and love the amount of data you get from the Venu.

And I can’t speak highly enough about the Venu’s battery life, which is staggering. It has managed to last six full days on a single charge. You’ll burn through the battery faster with an always-on display mode, but it’s not really designed for that. Personally, I don’t want a watch that I need to recharge on a daily basis, and so the Venu’s longevity is an asset.

Fundamentally, the Garmin Venu is a fitness watch that’s playing at being a smartwatch, and so fails to stand equal to devices from rivals. For its $399 asking price, you can get a number of other wearables that have better integrations with app ecosystems, music players and mobile payments. If, however, you treat it as a prettier version of the Vivoactive 4, then it stands a little stronger on its own merits. Just don’t go in expecting a credible alternative to smartwatches from Apple or Samsung.

OnePlus may introduce its first wearable alongside the OnePlus 8

Gadgets to help solve your problems

Industry Analysis and Forecast (2019-2026) – by installation, by application, by Technology, by Geography. – re:Jerusalem

The Spoken Word: Voice technology – The future of business