On Oct. 25, satellite communications company EchoStar (NASDAQ:SATS) finalized its deal to acquire Helios Wire for an undisclosed sum. With this move, EchoStar expands its satellite services beyond secure satellite business communications to add support for the Internet of Things, or IoT, while gaining worldwide rights to part of the S-band spectrum that runs IoT networks. This deft move positions EchoStar in a favorable spot to leverage the possibilities of S-band technology into ongoing success.

Many types of radar use the S-band, but advancing technology now utilizes it increasingly for satellite data transmission, too. One major advantage of this frequency is its power to transmit easily through rain or other bad weather, helping ensure strong service without interruptions. For IoT services, S-band transmission sharply cuts costs compared to other methods. That pricing improvement could potentially speed up the more widespread adoption of the Internet of Things, thus feeding back into more demand for EchoStar’s offerings. 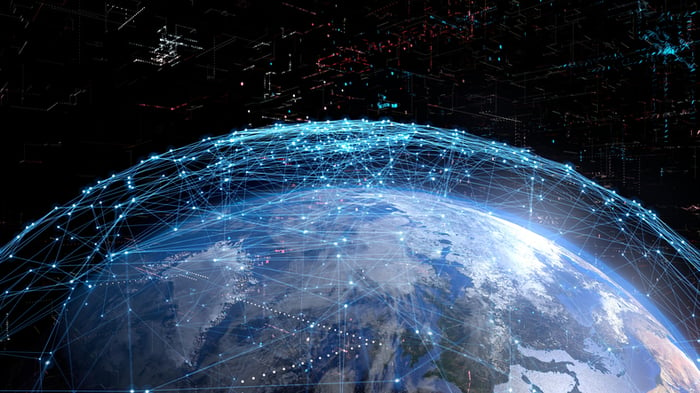 EchoStar’s latest purchase gives it a crucial chunk of spectrum to power more reliable satellite communications and conversations among the Internet of Things. Source: Getty Images.

Ongoing research in the field of S-band communications stands on the cusp of opening up fresh uses for EchoStar’s newly acquired spectrum rights and satellites. Cheaper IoT services will help with everything from smart home security to building automation, of course. But S-band scientists are also working to brainstorm the basis for global broadband Internet services.

Fujitsu Laboratories in Japan developed a transmission converter that turns short-range, high-data C-band signals, such as 8K streaming video, into a compressed format. This signal can then be transmitted quickly and efficiently over long distances via S-band transmitters – such as EchoStar’s satellites. Once at their destination, a second converter would decompress the S-band transmission back into C-band information, returning it to a usable format without much data loss. This meshes with emergent 5G technologies to open up a vista of global high-speed broadband Internet communication far more efficient than local or regional networks.

The double benefits of Helios to EchoStar

Helios, founded slightly more than three years ago, has plans for a 28-satellite constellation as part of its attempt to develop a secure global communications satellite service. It launched its first S-band satellite less than 16 months after its founding, claiming to have signed up $100 million worth of recurring yearly contracts during the same timeframe. Work apparently continues on the remaining satellites, which will eventually give EchoStar a significant increase in its array of near-Earth orbital devices.

The worldwide S-band spectrum rights of Sirion Global, a subsidiary of Helios Wire, is an even juicier prize for EchoStar to chew on. While many other companies hold rights over other parts of the wide range of S-band frequencies, Sirion Global purchased global rights to 30 megahertz of the S-band back in 2013. This bandwidth is enough to serve at least 5 billion units, such as IoT home automation nodes or security systems. Though Sirion struggled to make constructive use of this, the company gained an extension of its rights until 2021.

With EchoStar now in possession of Sirion through Helios, clearing the hurdles to actually utilize Sirion’s S-band bandwidth rights should be much easier, given the new owner’s long experience in successful satellite communications. EchoStar’s Chief Strategy Officer, Anders Johnson, stated that the purchase enables the company to develop new S-band technologies, then implement them globally.

What this means for EchoStar’s future

EchoStar is angling to get a piece of the action in a field that’s attracting big names such as Elon Musk of SpaceX. On Oct. 22, Musk successfully sent a Tweet through his Starlink internet router satellites as a proof-of-concept for his own venture into satellite broadband.

EchoStar’s high security standards and experience in maintaining maximum reliable uptime in the business satellite communications sector will likely serve it well in handling the IoT. Jokes about refrigerators questioning your junk food choices aside, the IoT demands a high level of privacy and security. It serves extremely sensitive purposes such as running home security systems, building automation, and personal communications. EchoStar’s experience gives it the rock-solid credentials – and real knowledge – to reassure IoT users that the company properly safeguards their personal information.

While EchoStar is currently concentrating on the IoT prospects of their shiny new S-band spectrum, it’s clearly also a key to unlocking many other satellite Internet innovations in the near future. Whether it’s for streaming high-quality funny cat videos at maximum resolution from the other side of the planet, or managing critical security systems remotely via the IoT, EchoStar clearly made a smart move in snapping up Helios while the opportunity existed. It’s an enterprise worth watching for future growth and investment potential.