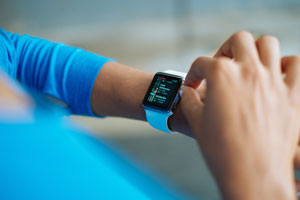 According to a forecast from Gartner, worldwide end-user spending on wearable devices will reach $52 billion next year. That’s an increase of 27 percent compared to 2019, which is “on pace” to reach $41 billion in spending, the research firm said.

Nearly half that spending (44 percent) will be on smartwatches, a segment with expected spending growth of 34 percent in 2020 compared to 2019. “More users coming into the smartwatch segment are replacing wristbands with smartwatches,” commented Ranjit Atwal, senior research director at Gartner, in a statement. “While brand leaders Apple Watch and Samsung Galaxy Watch command premium pricing in the smartwatch segment, lower-priced players such as Xiaomi and Huawei will counterbalance high-priced smartwatches with lower-cost smartwatches. We expect average selling prices of smartwatches to decline 4.5 percent between 2020 and 2021.”

In particular, Gartner predicted that by 2023, one-tenth of all wearables will be unobtrusive to the user, thanks to miniaturization advances that make sensors almost undetectable. “These discrete and nearly invisible wearables will particularly increase acceptance among reluctant end users,” noted Alan Antin, senior research director at Gartner.

About the author: Rhea Kelly is executive editor for Campus Technology. She can be reached at rkelly@1105media.com.