Nearly half (49%) of public schools in the United States have at least one School Resource Officer (SRO) on campus. The primary basic training course, taken in the first year on the job and provided by the National Association of School Resource Officers (NASRO), is 40 hours and focuses on their role as law enforcement officers in a school, de-escalation tactics and some information on mentoring students.

But while they have many opportunities for supplementary training, the majority of it focused on handling an active shooter, most SROs never experience an active shooter during their careers.

School homicides that involve multiple victims have become more frequent over the last decade, but they are still extremely rare, accounting for less than 2% of all youth homicides in the U.S.

Some SROs also come to Samarcand for a special type of training.

SROs train using a special software called VirTra that uses virtual reality technology to simulate intense situations an SRO might face in a school, including active shooter situations or a student who is trying to harm themselves. The software superimposes a school shooter, played by an actor, into footage from the SRO’s school. The SRO then uses a laser gun to point and shoot at the virtual gunman.

Before Lowery became an SRO, he worked as a detective in the Moore County Sheriff’s Office and experienced a shootout during his tenure.

“The first time I stepped on [to the stage] — the first scenario, the floor does vibrate if there are explosions, gunshots,” Lowery said. “The noise helps you and it takes me back because I’ve had that experience of being in the shootouts and having to do stuff like that. ”

To make the simulation even more visceral, officers can attach a little pack to their body that delivers an electrical shock if the virtual gunman shoots the training officer.

“That’s called a threat fire,” said Mike Kimbrell, Samarcand’s range master, who facilitates the VirTra training for SROs. “So, if you get shot, you actually feel the sensation of — a burning sensation.”

Lowery has been an SRO for three years and has done VirTra training multiple times.

He has yet to face a gunman on campus.

The U.S. Secret Service released a report in early November, which studied targeted school violence, including gun violence. It found that, of the 41 incidents of violence studied from 2008 to 2017, 12% ended with SRO intervention and 22% were stopped by a “non-law enforcement adult school staff”, which includes teachers, guidance counselors, assistant principals or sports coaches. 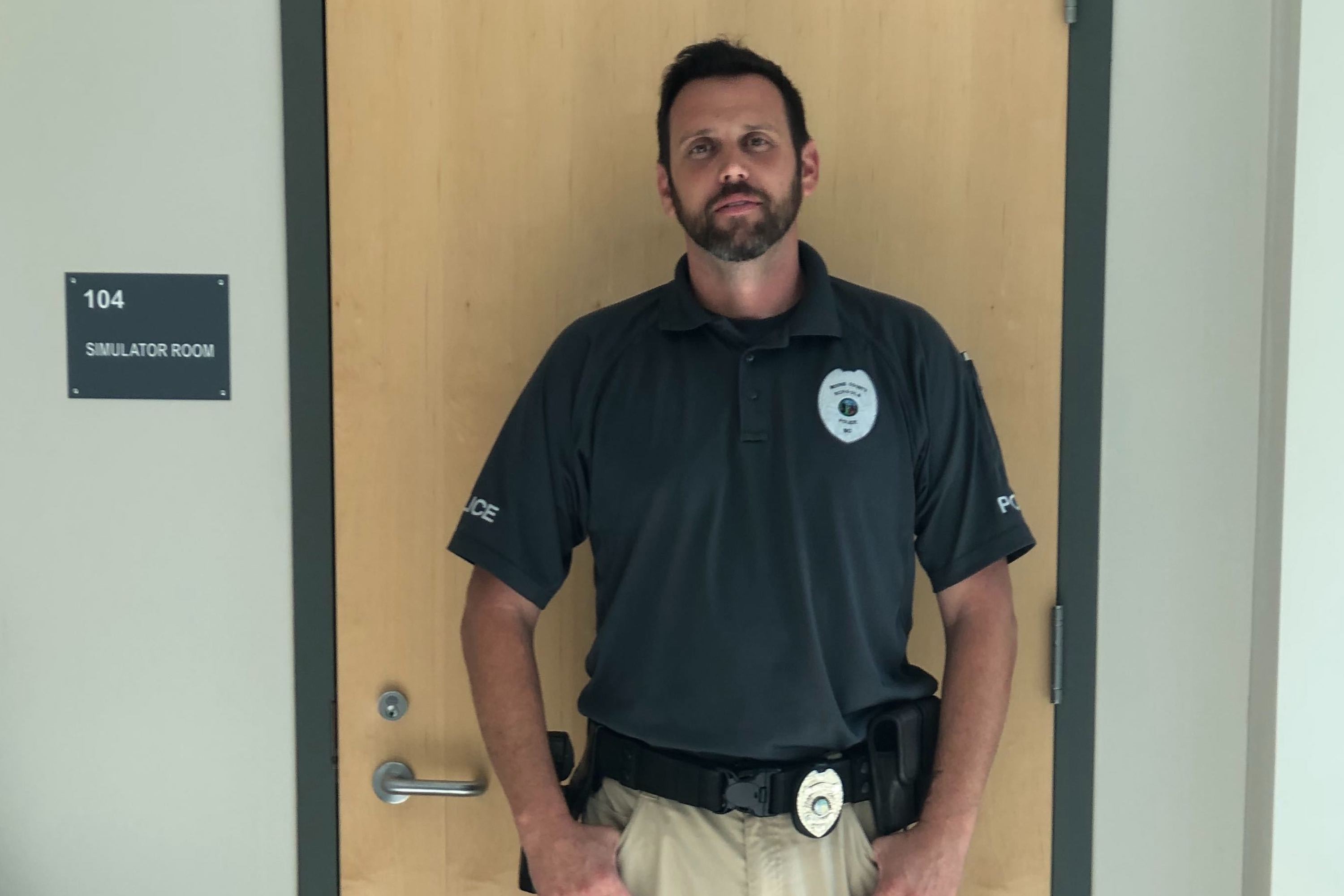 Jerico Lowery is an SRO for Pinecrest High School in Southern Pines, North Carolina. Earlier this fall, he trained with VirTra virtual reality software to better prepare himself to handle an active shooter situation.

Most days, Lowery, the SRO in Moore County, deals with more mundane problems. Often that means handling cyberbullying, or talking to students who might be skipping class or who might not have enough money to buy lunch that day.

“I think two years ago, when it snowed, I was actually out there helping them [shovel] sidewalks and stuff,” Lowery said. “It’s staying busy — it’s just building a community and a family in there. I mean, we’re a school of, like, 2,400 people. So, I mean, there’s lots of things that can be done.”

An SRO’s Many Hats

The National Association of School Resource Officers (NASRO) believes best practice for an SRO is to have them fill three roles in a school: educator, informal counselor or mentor, and law enforcement officer.

Lowery feels he has learned adequate tactical training skills for the law enforcement part of his job. And he says he has gotten some training for the soft skills, but he mostly relies on life experience to inform how he talks to students.

When he was a detective, Lowery learned how to interview children and serve as a crisis negotiator. But training on those skills isn’t required for most SROs.

According to a report from the American School Counselor Association, which looked at 10-year trends in student-to-counselor ratios in U.S. public schools, from the 2004-05 school year to the 2014-15 school year, on average, there’s one guidance counselor for every 482 students.

That means limited one-on-one time for kids in need. And that sometimes leaves educators and SROs to fill the gap.

Aaron Kupchik is a sociology professor at the University of Delaware and has studied SROs and their effect on a school environment.

“We put police officers in schools, expecting them to be social workers,” Kupchik said, “and they’re not trained as social workers.”

In a 2015 study from the University of Florida, Law Professor Jason Nance found that “regular contact with SROs was related to increased odds of referring students to law enforcement for lower-level offenses.” The study also found school and law enforcement officials disciplined students of color more often and more severely than white students for similar offenses.

Kupchik believes most SROs are well-intentioned. But he wonders if they are well-suited to counsel students.

“Their presence can shape a school’s social climate and make it slightly less oriented to students’ social, academic and emotional needs and slightly more oriented towards law enforcement,” Kupchik said.

Kupchik is not alone in this concern.

Mike Anderson is the Community Development and Training Manager for North Carolina’s Center for Safer Schools. He also used to be an SRO. He says part of an SRO’s job is to delegate problems to people who might be better suited to solve them.

“If you’re surrounded by people who have umpteen degrees in this stuff and you don’t,” Anderson said, “why not get that [student] to the resource they need?”

Anderson stresses to his officers that they are law enforcement first, school employees second.

But Anderson also believes that SROs need better communication training to more effectively reach the students they are trying to protect.

“We train law enforcement officers on the hard stuff, and I do think we need to start teaching that communication aspect,” Anderson said. “Like I said to some of my younger officers, ‘I’ve talked my way out of more fights than I’ve ever been in a fight.’”

Guns & America is a public media reporting project on the role of guns in American life.

Omaha, get ready for VR horror: Zombies, ghosts and other bumps in the virtual night | Sponsored Features

Add eye tracking to your HTC Vive headset for $149

Meross HomeKit, Alexa, and Assistant plugs + switches on sale from $16.50