It seems harder than ever for investors to stick with a buy-and-hold investing strategy amid 24-hour news cycles that report on every little move the market makes. Unending news about how companies are performing can make it feel like you’re doing something wrong by holding onto a stock when everyone (at least that day) is selling.

But picking great companies to invest in and holding onto them for years, even decades, can be one of the best ways to build wealth. To help you get started on that path, investors should take a close look at how Apple (NASDAQ:AAPL), Amazon.com (NASDAQ:AMZN), and Netflix (NASDAQ:NFLX) are setting themselves up for success over the next two decades. 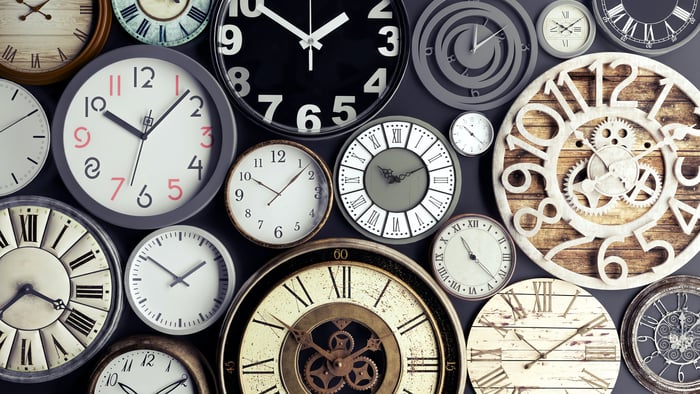 You’ve probably heard the rumors: Apple is done growing. Apple pessimists point to the undisputed fact that iPhone sales aren’t growing like they used to and the company can’t rely on the device to sustain its future. They’re right in the fact that iPhone sales will play an increasingly smaller part in Apple’s future, but they’re wrong about the company’s future potential for growth.

Apple is in the midst of a major transition away from relying on its iPhone to leaning more on wearable technology and the company’s services segment. And it’s likely a very smart move.

Apple is the undisputed leader in wearable tech, with the company’s Apple Watch and its AirPods earbuds leading the pack in unit sales for smartwatches and ear-worn devices. While wearables won’t replace iPhone sales completely anytime soon, the market for these devices is growing quickly. Wearable tech spending is expected to increase by 55% between 2019 and 2021. And in the most recent quarter, Apple continued to show just how well it’s benefiting from this market, with revenue from the company’s wearables, home, and accessories segment jumping 54% year over year.

Additionally, Apple is positioning itself to further tap into the services market through Apple Music, iCloud, Apple News, Apple Pay, the App Store, Apple Arcade, and AppleTV+. Revenue from the services segment grew by 18% in the fourth quarter, and it now represents 19% of the company’s total sales, up from 15% last year. With AppleTV+ just launching, investors can expect this segment to grow even more, and help round out Apple’s long-term plan of tying its devices to a never-ending revenue stream of services.

In 2019, just 11% of all U.S. retail sales occurred online, and two years from now that percentage will be just 14%. With online sales still taking up such a small percentage of total retail sales, Amazon still has a significant opportunity to increase its e-commerce dominance even further.

But, of course, that’s not Amazon’s only long-term play. The company actually makes most of its profit from Amazon Web Services (AWS), its cloud computing service. AWS has about 32% of the public cloud computing market share right now and is far ahead of its nearest competitor, Microsoft.

The cloud computing market will be worth $331 billion by 2022, and with Amazon already the clear leader in this space, it’s very likely that the company will continue to dominate the market for years to come.

If all of that weren’t enough to convince you of Amazon’s ability to grow over the coming decades, then also consider the company’s growing position in the Internet of Things (IoT). The IoT is still in its beginning stages, and Amazon has already laid the groundwork for the company to be a key player. Amazon’s Echo speaker lineup, its Alexa smart assistant, Ring doorbells, and other IoT devices and partnerships have given the company a huge opportunity to benefit from the smart-home market, which will be worth $151 billion by 2024.

Some investors may look at a Netflix recommendation and tilt their head in confusion. Really? Netflix is a buy right now, as the company’s share price is down 4% over the past year and the streaming market is becoming flooded by additional competition from Apple and Walt Disney? Indeed, it is.

Let’s tackle the first hang-up: Netflix’s share price slide. Investors were spooked over the summer when the streaming video giant reported second-quarter results that fell short of expectations. But that pessimism was misplaced. In the third quarter, Netflix increased its paid subscribers by 21%, and revenue jumped by 31%, both on a year-over-year basis. For a company that’s been around as long as Netflix, those are impressive growth numbers, and they come at a time when competition in the video streaming space is increasing.

Which leads us to the next hang-up some investors have with Netflix: Won’t AppleTV+ and Disney+ kill Netflix? To answer that, we need only to look at Netflix’s current streaming dominance. The company ended the third quarter with an impressive 158 million accounts worldwide — a massive head start over any of its competitors and the reason why it still has a competitive advantage over its late-to-the-game competitors.

Additionally, research has shown that users are more than happy to pay for several monthly video subscriptions without batting an eye. This means that tacking on an extra $6.99 for Disney+ or $4.99 for Apple TV+ per month won’t lead to Netflix users dropping their current subscription.

Remember the second part of this strategy

It’s one thing to see the great things that a company is doing to outpace its competitors and then buy its stock. But it’s quite another to hold onto that stock when a few bad quarters come along and negative headlines dominate the news feeds. When that happens — because it will happen — just remember to evaluate why you bought the stock in the first place to see if anything doesn’t fit with your initial investing strategy. And if nothing has changed, stay the course.

Understanding the Change of Direction, Tennis Catapults Into the Future

Google’s Fitbit Acquisition Is All About Apple

VR adds value to health and safety training in the workplace