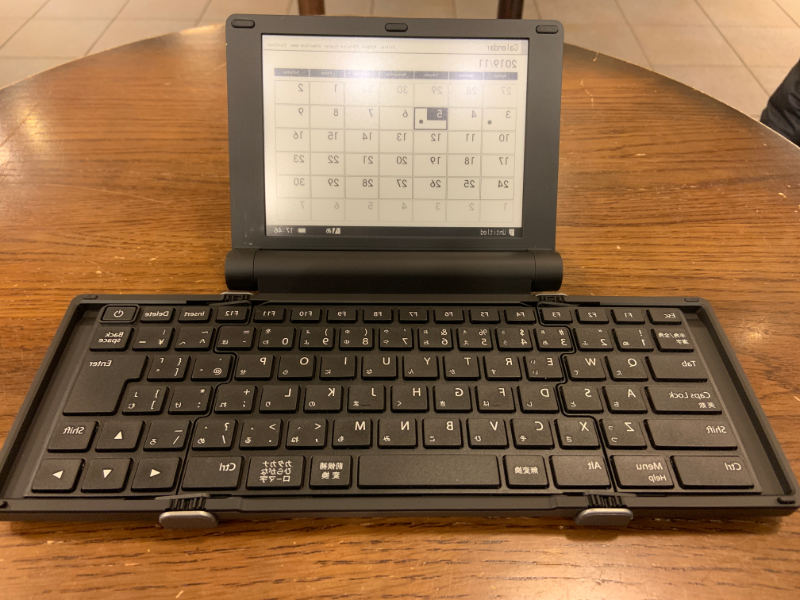 It’s no secret that Jason Weisberger and I have little love for the Freewrite. While it allows for distraction-free writing, it’s design, build quality and software limitations make it a pain in the ass to use. Having found that the device just isn’t for me, the last several years have seen me hunting for a highly portable distraction-free writing device that I can use when I’m not plugging away at my day job. The ability to constantly check in on Twitter, look at what’s new on Flickr and look up random, interesting but in the end, useless facts sucks the marrow out of my creativity and robs me of the small amount of personal writing time I have at my disposal. Happily, I finally found the tool I’ve been longing for: the KingJim Pomera DM30.

I imported mine from Japan (although you can sometimes find it on Amazon) after doing scads of research on the thing. It weighs less than a laptop and most tablets and when not in use can be folded up to around the size of a paperback novel.

When you’re ready to write, simply flip up its E-Ink display (which also turns boots the DM30 up in under two seconds,) unfold its near full-sized keyboard and you’re good to go. The DM30 boasts a Japanese keyboard layout which, at first, is a little vexing. Keys that North American Qwerty keyboard users have come to expect are not always where you’d assume them to be. To type an apostrophe, for example, its necessary to hit Shift and the number seven. It’s cool though: After a week of use, my muscle memory sorted itself out. I’m still typing a little slow, but I’m improving, every day.

Because the DM30 is rocking an E-Ink display, like the one you’d find on a Kindle, it’s possible to churn out words on the device in bright sunlight and see what you’re doing. The display isn’t backlit, but hey, turn on a light when you need to. You’ll find the DM30 doesn’t offer any fancy formatting options or templates like Pages, Scrivener or Microsoft Word do. However, an excellent collection of keyboard shortcuts makes it easy to move through your copy and edit it, just as you would using a laptop keyboard. Did I mention that it can run for 20 hours at a time on a single pair of AA rechargeable batteries? No? Well, it’s got that going for it, too. In addition to being able to act as a word processor, the DM30 comes rocking a VERY basic grid for creating spreadsheets and a monthly calendar that I’ve found to be perfect for keeping journal entries in. It’s capabilities are absolutely basic and absolutely delightful.

The DM30 comes with 128MB of onboard storage: more than enough space to stash hundreds of .txt files in. You can also opt to plug an SD card into it for expanded storage and easy shuttling of files to or from a computer. A USB cable can be used for this purpose as well. However, I’ve found that my favorite method for shuttling what I’ve written to my other devices is via QR codes generated by the DM30. A free Pomera app can be downloaded to iOS and Android smartphones for reading the QR codes. Line up the code with your handset’s camera and BOOM, your text is magically transferred and ready to plug into any app.

I’m in love with this thing, but it does worry me sometimes. While its design is a work of genius, the materials used aren’t all that resilient. The DM30 feels sturdy enough, but were I to drop it, I don’t think it’d end well. I have some talented friends in Seattle making me a custom case to protect the investment in my Japanese writing geek awesomeness.

Hopefully, I’ll never have to find out how survivable it makes my DM30.

In this age of ever-shrinking gadgets, it bears reminding that sometimes bigger is actually better. And if you care about audio quality, we can’t think of a better example of this principle than these TREBLAB Z2 Bluetooth 5.0 Noise-Cancelling Headphones. We know tiny Bluetooth earbuds are all the rage right now. But their battery life […]

In this Instagram age, pictures aren’t just worth a thousand words; they can be worth a pretty penny, too, which makes graphic designers a highly sought-after profession. But being a graphic artist takes more than just the ability to draw a picture, and certainly more than the ability to navigate through Photoshop. The School of […]

A typical security camera can give you peace of mind. But that might be offset by the nagging feeling that it’s watching you, too. The best kind of security system is one that protects both your home and your privacy, and the blurams Dome Pro 1080p Security Camera is one rare model that’s set up […]

If you have a Switch Lite, you should get this Nintendo flip case