Testing out Arlo’s impressive third-generation cameras has gotten me a bit obsessed with tech-ing the home with smart security hardware.

Though I live on a relatively uneventful street in a quiet Western Sydney suburb, break-ins have been commonplace lately, which in the past few months has made me appreciate this necessary smart home technology even more. It is, however, a rather expensive ecosystem to get into.

That’s why the Arlo Video Doorbell is a necessary step for the company. It’s a massive improvement on their Audio Doorbell, finally catching up with Nest and Ring by adding great video quality to the immediate area in front of your door for extra security, convenience and peace of mind.

You’re also paying under $300 for a great Arlo security camera, as opposed to hiking up closer to a grand for the Pro or Ultra cameras.

Arlo hasn’t played too far outside of their usual aesthetic with the Video Doorbell. It’s a clean, rectangular profile with a white case running around a glossy black face. Rounded edges help it look slick, but that would depend on your doorframe. My one has creamy wood, which makes the white and black look rather jarring, but at least it stands out enough to give would-be door-knockers something to notice before pounding away.

The Arlo Video Doorbell measures in at a slightly bulky 5.0 x 1.7 x 1 inches, but its slimmer than most of what’s already out there. There’s a camera at the top of its face and a large button at the bottom, the latter activating any alerts when pressed. When the button is touched a circle of LEDs quickly illuminate. The lights also spark up softly if the doorbell detects someone approaching, making it quite clear that this is what they will need to get your attention.

Also on the bottom, near the button, is a speaker and a microphone for two-way audio. While I found conversations to much clearer and more pronounced than Arlo’s Audio Doorbell, there is a noticeable lag when speaking to someone from your phone.

It’s certainly cleaner and more subtle than Arlo’s comparable Audio Doorbell, with the functionality being substantial enough to warrant an upgrade. Although if you’ve got the accompanying Arlo Chime, keep it. There’s a chime connection kit include in the box of the Video Doorbell so you can easily integrate the two. Although there’s not much need to if you just want to make-do with your smartphone notifications – easily more practical in most cases.

The glaring point of contention here is that this is a wired doorbell. That doesn’t mean much if you already have the wires in place to install a doorbell, but it’s a hassle for those who don’t already have such infrastructure installed. If you’re fortunately the former, installation shouldn’t take any longer than 10 minutes. With the secure back mounting plate (note that there’s also an angled mounting plate to account for varying surfaces), the doorbell reliably stays in place. Anyone who tries to tamper with it immediately triggers the doorbell’s built-in siren.

If you don’t have wiring, you’d have to be determined to stay in the Arlo ecosystem to go for this over unwired, battery-powered options. You could just go for Arlo’s Audio Doorbell, but you’d be sacrificing a pretty significant point of view, and a remarkably discerning camera at that.

With Arlo Pro cameras working so well, there’s no reason why the company shouldn’t be best-in-class with their video doorbell. Do note that I haven’t tested enough video doorbells from other brands to make a proper comparison.

With the HDR camera, you’re getting a respectable resolution of 1,536 x 1,536 pixels with 12x digital zoom and a very useful square 1:1 aspect ratio. This allows for a 180-degree field of view and up to 20 feet of night vision thanks to infrared LEDs. That’s a lot of area to take in, scanning the complete head-to-tow area in front of the door, including towards the bottom where packages are dropped.

I’ve included a supplied photo comparison of the aspect ratio for the Arlo Video Doorbell versus the standard of 16:9. Simply because I’d rather not show my pitiful front yard. As you can see, 1:1 just makes much more sense for a doorbell, especially if you’ve got other cameras covering other perspectives. 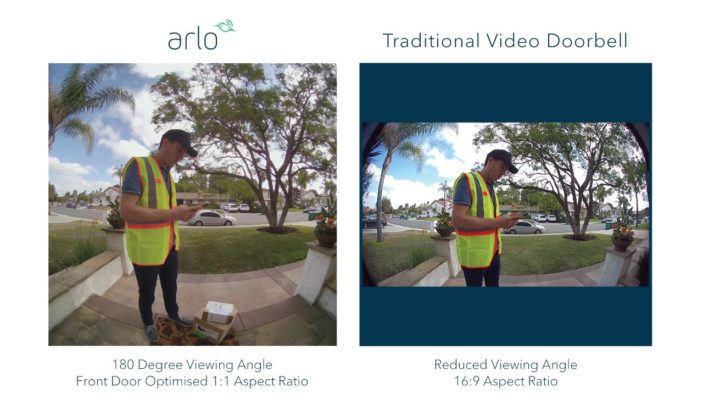 As with the other, newer cameras, you can use the intuitive and clean Arlo app to create custom motion-detection zones and define ‘no-motion’ areas around your front door, should you want the camera to ignore certain movements (like windchimes or trees). This is fairly standard on Arlo products now, and it’s nice to finally have a doorbell with this feature.

Detection is very efficient, with the app responding instantly once the camera is triggered. If you have access to smart features (via the $3 per month Arlo Smart Plan) then the lens reliably distinguishes between people, vehicles, animals and packages. Calls also come through immediately once someone presses the doorbell, and you can either accept or play a pre-recorded message which comes out nice and clearly on the other end.

The ability to control what notifies you and what doesn’t, tightening the criteria up to a button-press only, should be well-received by users who live in particularly busy areas. As mentioned above, I live in an unremarkable street, so it matters much less.

You can also set a schedule for the doorbell to arm and disarm itself automatically, or have it dictated by the geolocation of your phone. That is, if you’re home then the doorbell system is disarmed, but arms automatically when you leave.

As for what kind of video the doorbell actually produces. During the daytime I found that the resulting picture, when viewed on my Google Pixel 4, was colour accurate and sharp. The real test for this was always going to be night video, and luckily the doorbell also handles that well, with a black-and-white presentation, great contrast and fair clarity.

For those who are already part of the Arlo ecosystem, it may not produce night video as sharp and smooth as the Pro 3 or Ultra, but it does a good enough job that you can easily distinguish small details when its dark.

Out of box the doorbell supports Amazon Alexa and works seamlessly with any enabled device, whether that’s audio-only or video streaming. Google Assistant and Apple HomeKit should come soon enough, but those who rely on either may want to hold out. The Pro 3 cameras only received HomeKit compatibility recently, so it’s only a matter of time.

The biggest reason for investing in an Arlo Video Doorbell, particularly for those who haven’t already bought into the ecosystem, is that it’s a much more accessible way to get one of their cameras up in front of your house. It’s also resting at a more secure position, whereas often people are installing their cameras further away from the front door with a higher chance of tampering.

It’s therefore a very solid choice for anyone in the market for a smart doorbell, whether as an affordable standalone or as part of an ecosystem all working together to monitor the home with laser-like precision. The crisp HDR video during the day and the relatively sharp video at night go a long way in atoning for Arlo’s tardiness. They were late to the game with this one, but they deliver a fantastic performance.

FOUR AND A HALF STARS (OUT OF FIVE)

Review based on a device supplied by Arlo.

More to Explore on the AU:

Wunderlist founder offers to buy back app from Microsoft