I recently wrote an article about Invitation Homes (NYSE:INVH), a single-family property REIT, in which I remarked on the merits of investing in residential property. In this article, I’m focused UDR Inc. (NYSE:UDR), which focuses on high-quality apartments in many large MSAs (metropolitan statistical areas). UDR’s share price is still down significantly since the start of the year, with a 16% decline. I believe this gives investors an opportunity to pick up a high-quality play, and I evaluate what makes UDR a buy at the current valuation, so let’s get started.

A Look Into UDR

UDR is an Apartment REIT that’s been in business for more than 45 years. It focuses on owning and acquiring high-quality apartment complexes in densely populated areas. In 2019, UDR generated over $1.1 billion in rental revenue. Its properties are typically adjacent to or nearby first-rate shopping, restaurants, nightlife, and business centers. What I like about UDR is that it provides a number of high-tech amenities across its communities, with free WiFi, and smart home technology, including smart locks, thermostats, and light switches. 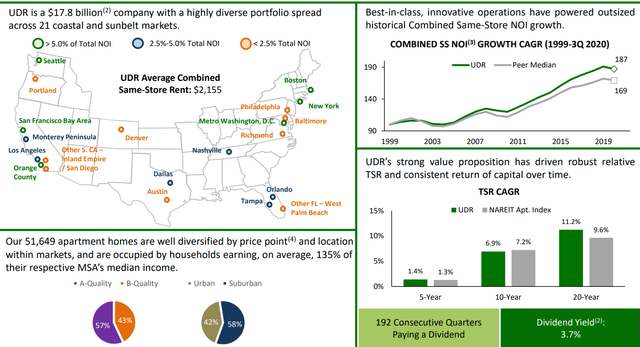 As seen above, UDR is well-diversified geographically, with exposure to the northeastern, southern, and west coast regions of the U.S. It currently derives 23.1% of its NOI from New York, San Francisco, and Boston. Its tenant base is primarily high-income, with their average median income at 135% their MSA’s median income.

UDR also has a strong track record of shareholder returns. Over the past 20 years, UDR has generated an 11.2% CAGR, which is 160 basis points higher than that of the NAREIT apartment index. This is supported by strong same-store annual NOI growth rates over the past 10 years, which, at an average of 4.5%, surpasses the 4.2% average of its peer group, including AvalonBay (AVB), Essex Property Trust (ESS), Mid-America Apartment Communities (MAA), and others. This outperformance speaks to the durability of UDR’s business model over an extended period of time.

UDR’s performance has stabilized during the current environment, with Q3’20 FFOA/share (FFO as adjusted) landing at $0.50, which is down by just a penny from $0.51 in the second quarter. It should be noted that UDR continues to face a challenging operating environment, as same-store NOI declined by 10% YoY, driven by a revenue decline of 5.9%, and an expense increase of 4.2%. This decline was driven by UDR’s exposure to New York, San Francisco, and Boston. However, things are not as bad as this headline number suggests. When accounting for rent concessions on a straight-line basis, the YoY NOI and revenue were down just 6.4% and 3.3%, respectively, during the third quarter.

Looking into the near term, I expect to see more of the same, as management has provided Q4 FFOA/share guidance at $0.48 to $0.50, which is about in line with $0.50 in the third quarter. However, I’m optimistic, as UDR’s Tier-2 markets (i.e. Orlando, Nashville, Austin) has seen strong occupancy, at 97.5%. Plus, management is seeing some signs that the most troubled markets of Manhattan, San Francisco, and Boston have bottomed out and are in recovery mode in early Q4, as noted during the recent conference call:

Roughly 20% of our NOI is in suburban areas of coastal markets, where demand and growth are more dependent on office re-openings, mobility trends, work-from-home flexibility and a vaccine. These include Manhattan, San Francisco and Downtown Boston. Concessions across these markets have average four to eight weeks. But some competitors have offered up to 12 weeks on new leases. Average occupancy across these markets was a mid to high 80% range during the third quarter, but has since improved to 91.6% in October, with Manhattan leading the way.“

In the long term, I see a full recovery for UDR’s business, as I’m encouraged by the accelerated timeline for COVID-19 vaccinations to start as early as the 11th or 12th of December, with the anticipation of herd immunity by May. In addition, UDR should benefit from millennials, who, as a group, are delaying marriage and starting a family. As seen below, the average age for both marriage and having children in the U.S. has steadily climbed up since 1980.

Plus, I don’t see UDR’s urban-centered properties losing their allure, especially after the pandemic ends. This is supported by the growing presence of large tech companies, such as Amazon (AMZN) and Facebook (FB), which both have a growing presence in Manhattan.

Meanwhile, UDR maintains a strong balance sheet, with a BBB+ and equivalent rating from S&P and Moody’s (MCO). Its net debt-to-EBITDAre ratio sits at 6.5x, which is higher than the 6.0x level that I generally prefer to see for REITs, but it has a strong fixed charge coverage ratio at 4.7x. Plus, it has about $1 billion in available liquidity through a combination of cash and unused capacity on its revolving line of credit. As seen below, it has a well-staggered debt maturity schedule with no maturities until 2023.

Lastly, I find the 3.7% dividend yield to be attractive, especially in this low-rate environment. The payout ratio remains safe at 71%, and UDR’s dividend has had a five-year CAGR of 5.9% with 10 years of consecutive annual growth.

UDR has seen a challenging operating environment due to its exposure to urban areas that have been most impacted by COVID-19. However, the recent results suggest that the performance is stabilizing, with signs of improvement in early Q4. Plus, I see the recent vaccine news as an encouraging sign that the pandemic will have an expiration date. In the long term, I expect UDR to benefit from the demographic trend of millennials delaying lifestyle choices and by the growing presence of tech companies in urban areas.

At the current price of $39.22, and a forward P/FFO of 19.5, the shares are not necessarily cheap. However, I find it do be reasonable, given UDR’s strong track record of shareholder returns and its desirable locations. Plus, it remains well below the $45 to $50 level that it traded at earlier this year. Given the aforementioned, I find it reasonable for the share price to reach that level by the middle of next year, or prior to that. Buy for income and growth. 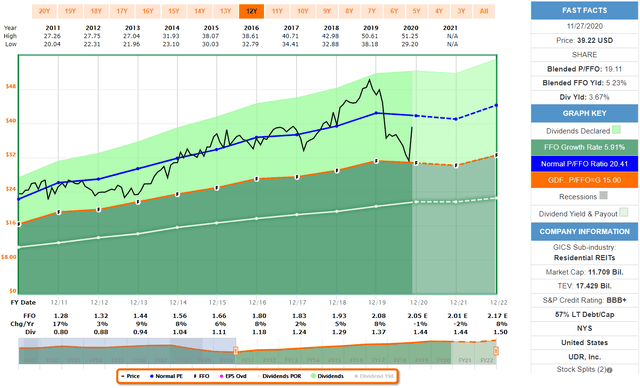 Thanks for reading! If you enjoyed this piece, then please click “Follow” next to my name at the top to receive my future articles. All the best.

Disclosure: I/we have no positions in any stocks mentioned, and no plans to initiate any positions within the next 72 hours. I wrote this article myself, and it expresses my own opinions. I am not receiving compensation for it (other than from Seeking Alpha). I have no business relationship with any company whose stock is mentioned in this article.

Additional disclosure: This article is for informational purposes and does not constitute as financial advice. Readers are encouraged and expected to perform due diligence and draw their own conclusions prior to making any investment decisions.

Fitbit is considering a sale, with Google named as a potential buyer